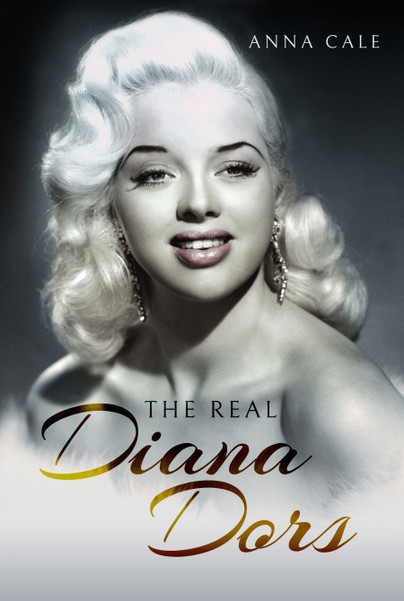 Click here for help on how to download our eBooks
Add to Basket
Add to Wishlist
You'll be £8.99 closer to your next £10.00 credit when you purchase The Real Diana Dors. What's this?
Need a currency converter? Check XE.com for live rates

The story of Swindon-born film star Diana Dors is one of fame, glamour and intrigue. From the moment she came into the world, her life was full of drama. Her acting career began in the shadow of the Second World War, entering the film world as a vulnerable young teenager and negotiating the difficult British studio system of the 1940s and 50s. Yet she battled against the odds to become one of the most iconic British actors of the 20th century.

This book follows her remarkable story, from childhood in suburban Swindon, to acting success as a teenager and finding fame as the ‘the English Marilyn Monroe’. Many remember her as an outspoken and sometimes controversial figure, grabbing headlines for her personal life as often as her film roles. For Diana, image seemed to be everything, but there was more to her than the ‘blonde bombshell’ reputation suggested. A talented actor, she worked on numerous film and television projects, building a fascinating career that spanned decades.

Set against the backdrop of the changing social landscape of twentieth century Britain, this book charts the ups and downs of her diverse acting career and her tumultuous private life, to build a fascinating picture of a truly unique British screen icon.

Many people believed Diana Dors to be the British Marilyn Monroe and I have to agree. She was a beautiful woman both inside and out, and this book gives a lovely insight into her life from childhood through fame.

A well -written biography on a star who was popular in British Movies and was often compared to Marilyn Monroe. even when she wanted to be taken seriously as an actress. I had heard of her since I am a huge movie buff and even remembered that she was married at one point to Richard Dawson (yes of Hogan's Heroes and Family Feud!) She acted in everything from Oliver Twist in the 1940's to Deep End in 1970 which I just saw recently, and also Theater of Blood with Vincent Price (a great absurdist horror film by the way).. IF you look at her IMBD page, you will see many television shows as well -- she definitely was a working actress through many decades. Her estrangement from her children brings real sadness to her story. I am glad I read this -- I did not know much about her life and career so it was overall an enjoyable read for all movie fans!

Featured in the August 2021 edition of the Yorkshire Reporter.

An informative, well researched book
Diana Dors for me is up there in my mind’s eye as an icon, glam, a bit of a ‘one’, big hearted, a great laugh and with a tumultuous romantic and personal life
Yet this was mostly based on what I had conjured up or briefly read or my visions of her in Adam Ant’s Prince Charming video, someone I ‘knew’ yet really didn’t, there was much to learn
Having not read her 2 autobiography’s I really did learn a lot about the legend, where she came from, her young life, her desire to succeed, her many passions and her acting career plus of course the many scandals ( some true ) that followed her throughout life
The book, very chronologically takes you through all this and it is mostly in a clinical time stamped way but for me this was great, every show and every actor listed was not a chore to read but enjoyable
Personal life wise there were some shocks, disappointments even in her decisions re various things but then the same could be said for all of us, I kept reminding myself of this
Quite humorous at times, desperately grim at others but at all times intriguing and I would say my view of Diana Dors after reading it as stated above is exactly the same, she remains totally fascinatingly alluring

“I just wish I could have gone for a drink with her.” Anna Cale, The Real Diana Dors


I really loved this look at the life of Diana Dors, I knew a little about her but not a great amount and I found this book to be a really interesting and well presented biography. It really draws you in and covers Dors' career and life in the film industry, but also covers her personal life and goes into detail of her happiness and her troubles. Interesting and definitely recommended for movie fans, especially of the British film industry, as it really covers a lot of insight too here.

All in all, Cale’s book is a fascinating and meticulously researched work, drawing together a full picture of Dors’s life from a wide range of sources. These include original interviews, contemporaneous media interviews given by and about Dors, her own autobiographies, mentions of her in other people’s autobiographies and retrospective articles that discuss her cultural context. These are all documented in an extensive bibliography and filmography. The author expertly weaves in culturally and socially significant events to reflect Dors’s experience (the law on abortion in the 1950s for example)... While the book does not shy away from mentioning the rollercoaster of events which she lived through, it is careful not to let these define Dors alone, and the star herself is rightfully well quoted. As a result, Cale succeeds in painting not a picture of a good-time girl nor a magical fairy godmother, but a rounded portrait of a woman who lived an extraordinary life.

I had heard of Diana Dors but i only knew she resembled Marilyn Monroe and that she had been married to Richard Dawson until reading this book.

She was in many movies and TV shows for most of her life and also sang and had a cabaret show to bring in money when she wasn’t acting. She also had a lot of trouble with men and husbands. Unfortunately, she died fairly young, in her 50s.

The book was an easy read with Diana’s life being told sequentially. There were a few parts that went into too much detail for me, such as movie plots and the history if British TV, but that’s my personal preference. Overall, a great informative book.

I was wanting to learn about the actress Diana Dors, so I picked up this book on her. It tells about her ups and downs as she began working towards her early goal of being a star. She started as a teenager, learning the ropes, studying acting, and went on to get a start in the industry. Her love life certainly didn’t help her career any. This is an interesting book on her, sharing what she went through.

I would highly recommend this to readers who either remember Diana Dors but don't really know her life story or have heard the name and enjoy good celebrity biographies. In addition to a fascinating life story you will also learn a lot about British cinema during and post WWII, which is itself quite interesting.

I love a good autobiography and ,even though I had read books about Diana Dors in the past, I found this book really interesting and entertaining.
I had forgotten just how dramatic her personal life was and how popular she was the "uk’s Marilyn Monroe”.I think it will be. Interesting for those who remember her and for those who might only know her from her films.

Diana’s life story on and off-screen is told in the upcoming biography, The Real Diana Dors by Anna Cale. This book gives a fascinating and honest insight into this actress. In Cale’s wonderfully researched book we not only learn the truth of Diana’s often turbulent life off-screen, but more about the movies and television shows that she starred in, and their place within the then British film industry. Cale tells it as it was during these sometimes difficult times in Diana’s life, with understanding and compassion.

Having been introduced to Diana Dors, via the music of Morrissey, I had no prior knowledge of her career, at all. This made Anna Cale's book a perfect starting point, and I now feel suitably educated. Anna Cale has quite the talent in telling Diana's story; from her middle-class upbringing to drama school, becoming a film / TV star, and her chequered relationships with a stream of unsuitable men. Diana Dors was probably the first film star to succumb to 'celebrity' and Britain's notorious print media. Although courting them for publicity, Diana's colourful and often chaotic lifestyle gave them column inches by the bucketload. I hadn't realised that she very nearly broke Hollywood, nor that she never really had a singing career. The 'Swinging Dors' album, recorded in 1960, and re-released in 2007 is a definite listen! I can recommend this book. Britain's 'answer to Marilyn Monroe' was certainly a lot more than that!

The author Anna Cale gives a fascinating insight into the life of Diana Dors, the ‘blonde bombshell’ and Britain’s sweetheart, with inevitable comparisons to Marilyn Monroe. Diana’s story has many highs and lows but her ambition and determination result in a long and successful acting career, becoming a household name. Her glamour girl image at times belies a traumatic private life and personal tragedies. It is a story well written and very well worth reading. Highly recommended.

I’m not really an autobiography reader but Diana is a little different. She was a curvy platinum saucy icon. If you say Diana Dors everyone seems to have a view of her being that person. She is so much more. A really interesting read and has been read by all the family. I think she does resonate with lots of age groups too. Excellent interesting read.

Anna Cale does a great job of relating the incident-filled life of Diana Dors, the determined young woman who excelled at acting school only to be frustrated that she was usually cast in roles because of her stunning looks rather than her acting abilities. Her choice of men always caused complications and she appeared to be a magnet for flawed characters. My memories of her are from "Queenie's Castle", "Just William",various game and chat shows and despite the years since I saw it her memorable performance in "The Sweeney". . I was keen to learn more about the earlier life and career of someone who was a mainstream comedic character back when she was touted as "The British Marilyn Monroe".

As the book tells of Diana's life it also shows how British Cinema changed and evolved as her career did ,from the boom years that stoked a girl from Swindon's dreams to gradual decline,a flirtation with slightly grubby and best forgotten "Confessions" type movies then virtual extinction.
My main impression on finishing the book was of a massive talent frustrated in her early career and almost blighted by her looks , which seemed to be all that most movie makers were interested in.
Diana Dors was far from perfect but she deserved better than she got both in her acting career and her private life.
A great book about a true icon.

Anna Cale is an arts and culture writer who specialises in classic film and television. She has written for a number of publications and websites, including Little White Lies, Film Stories and the British Film Institute, and has also appeared on Radio 4. Her writing subjects are wide ranging, but she has an interest in British cinema of the 1940s, 50s and 60s, and in particular showcasing the role of strong female voices in film culture.