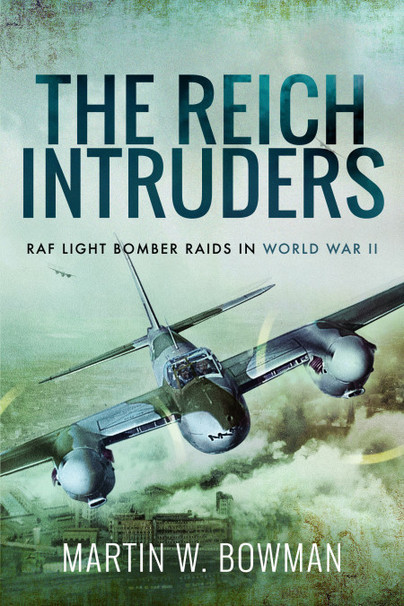 Add to Basket
Add to Wishlist
You'll be £14.99 closer to your next £10.00 credit when you purchase The Reich Intruders. What's this?
+£4.50 UK Delivery or free UK delivery if order is over £35
(click here for international delivery rates)

This is the story of 2 Group RAF during World War II. Much of it is told by the men who flew the Blenheim, Boston, Mitchell and Mosquito aircraft that carried out many daring daylight and night-time raids on vitally important targets in Nazi occupied Europe and Germany. These were not the famous thousand bomber raids that hit the wartime headlines, but low-level, fast-moving surprise raids flown by small formations of fleet-footed and skilfully piloted twin-engine light bombers. Their targets were usually difficult to locate and heavily defended because of their strategic importance to the Nazis. 2 Group also played a vital part in the invasion of Europe both before and after D-Day. Often they would fly at wave-top height across the English Channel or North Sea to avoid detection and then hedge-hop deep into enemy territory to deliver their precision attack. Enemy fighters and anti-aircraft fire were a constant risk. This is a remarkable story of skill and bravery by a little known branch of the RAF.

Covering the light bombers of 2 Group in WWII, this book from air war historian Martin Bowman brings a high level of detail and first-hand accounts of the twin engine, low level bombers such as the Blenheim, Boston, Mitchell and Mosquito that have been largely forgotten.

After reading this you’ll look at these bombers with a whole new respect. The stories of low-level raids from the crews leave you in awe.

It’s a very interesting, authoritative, and in places, sobering read.

An excellent book, so if you missed it back in 2005, look out for this new reprint.

The author has provided a moving and exciting account of the light bomber raids by No. 2 Group light bombers. It is a remarkable story of great skill and bravery by a branch of the RAF has been largely neglected.

I particularly like the explanations for each of the photographs contained in the text, and each chapter has a quotation or verse at the beginning. If you are interested in British aviation history, then this book would make a good addition to any collection. Also this just tells a remarkable story of the skill and bravery of those brave men who served in this little know branch of the RAF.

After the disaster in the Heligoland Bight’s sky on December 18th, 1939, RAF daylight bomber operations against Germany were almost completely stopped. Just a few squadrons of light and medium bombers continued their sorties to the Third Reich’s targets from dawn till dusk. They were called Group No. 2 of Bomber Command (it has become a part of Second Tactical Air Force after 1943). Bold and dashing crews of Blenheims, Venturas, Bostons, Mitchells and Mosquitoes bombed airfields and marshalling yards, factories and power plants, coastal convoys and even prisons. Overcoming fierce opposition they in fact called massive fighter attacks and dense flak onto themselves. All that could be done is simply wonder how both Victoria Crosses won by the pilots of this Group in 1941 (Hughie Edwards) and 1943 (Leonard Trent) respectively were awarded to the living recipients.

Martin Bowman – the author of The Reich Intruders and perhaps the most known modern air war historian – has made his usual traditionally meticulous and well-researched work. Through combination of first-hand accounts and document sources he describes the exploits of British, Commonwealth and Allied twin-engine bomber crews who fought and won their own war in the Europe’s sky bravely and regardless its cost