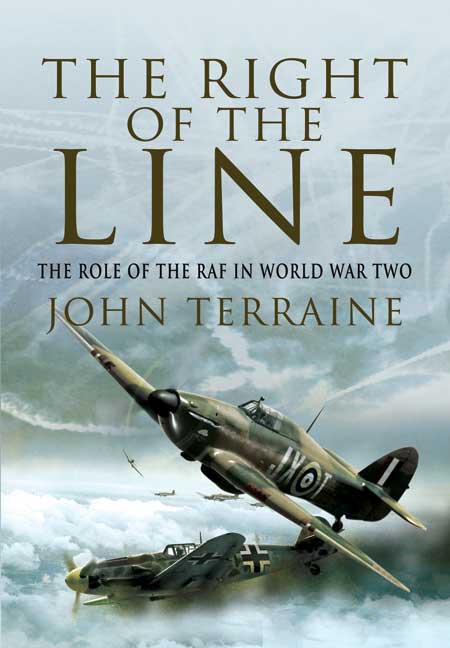 The Right of the Line (ePub)

The Role of the RAF in WW2

Click here for help on how to download our eBooks
Add to Basket
Add to Wishlist
You'll be £4.99 closer to your next £10.00 credit when you purchase The Right of the Line. What's this?
Need a currency converter? Check XE.com for live rates

Traditionally, 'the right of the line' is the vanguard, the place of honour and greatest danger in battle. In this history of the Royal Air Force during the European War of 1939-45, John Terraine shows how the RAF, which in 1939 was small and inadequate for the task it was called upon to perform had, by the end of the war, taken up its proper position. He describes the build-up to war, the early tests in France and at Dunkirk, the Battle of Britain, the Battle of the Atlantic, the RAF in North Africa and the Mediterranean, the strategic air offensive over Germany and eventual victory in Europe.

'His best book yet' The Times

Is a book of this weight (literally) and size a work of reference or is it a narrative that can be enjoyed as a good read? In order to review the book thoroughly I decided to find out the answer to this question by reading it from cover to cover, rather than simply dipping in.
The author writes with a very easy, engaging, authoritative and thought-provoking style - I enjoyed every page of it. The depth of his scholarship is immense and he is never afraid to put forward his own opinion or interpretation, regardless of whether it agrees with the previously accepted version of history or not. I would advise keeping a finger or bookmark in the copious notes section at the back, as it pays dividends to refer to it at the appropriate point in the main text. It should also be noted that the war against Japan is not covered - for which the author apologises in his foreword.
The book begins by analysing the pre-war rearmament process in some detail and sets it in its political context in both the United Kingdom and Europe. A particularly fascinating passage concerns the development of the RAF's Tipex encryption machine. This is followed by an excellent, detailed survey of the preparedness (or otherwise) of the RAF for war in the 1930s and the steps taken to improve the situation. One of the most important figures of this period who steps out of the shadows into which he has been cast, is the then Chief of the Air Staff, MRAF Sir Edward Ellington, whom the author contends has been greatly under-appreciated. He also has kind words to say for ACM Sir Edgar Ludlow-Hewitt, who was AOC-in-C Bomber Command during a very difficult period. Indeed Terraine's trenchant views are expressed cogently in much the same manner as the quotations he uses from Ludlow-Hewitt himself.
He makes the very fair point at some length that the Battle of Britain was not won by the skill of pilots and the excellence of the Hurricane and Spitfire on their own. He gives due weight to the command and control system devised by ACM Dowding and operated by ACM Park, as well as the supreme importance of technical developments such as radar. He is balanced and fair when examining the well know Dowding/Park/Leigh-Mallory/Bader "Big Wing" controversy.
Throughout the text the author does not rely on the benefit of hindsight in making his judgements but tries to give the reader a feel for why particular decisions were made at the time, which may look questionable now but seemed very reasonable at the time. For example, read his survey of Bomber Command's long campaign, which at one stage was the only means by which we could carry the war to the enemy but which did not in the end prove that it coud win the war on its own. He is also highly critical of the misuse of Fighter Command in costly daylight sweeps in 1941.
Tedder and Coningham come out of the story well, better perhaps than portal, who for all his intelligence comes across as rather a cold fish; though in fairness it should be said that both Portal and Harris may well have been such keen advocates of the heavy bomber as they wished at all costs to avoid the terrible casualties on the ground as were suffered in 1916-1917. Bombing only really met with success with the development of GEE, OBOE, H2S, target indicator bombs, window and escort fighters, such as the P.51. Area bombing did not break German morale as had been fervently hoped, nor did it halt production but it did divert huge resources to the German home front - at enormous cost to the men of Bomber Command.
The author demonstrates to my mind beyond reasonable doubt that the real war winning use of air power was on the one hand, interdiction and tactical support of troops on the ground, as proven in North Africa, Italy and Normandy and on the other in the winning of the Battle of the Atlantic (particular praise being reserved for Ulsterman S/L Terry Bulloch). All of these campaigns are covered in considerable depth. Air power could not win the war on it own but neither sea power nor land power could prevail with air superiority.
This is a hefty book and represents the investment of a tidy sum of money - all i can say is that it is worth every penny and should have an honourable place on the right of any serious aviation historian's bookshelf. It was first published in 1985 and Pen & Sword are to be congratulated on this timely reprint. Highly recommended

This is one of the classic histories of the Second World War, focusing on the role played by the RAF in the war against Germany, both at home and overseas. In this rather large single volume Terraine covers the pre-war expansion of the RAF, the battle in France, the Battle of Britain, the Atlantic, the strategic bombing campaign, the campaigns around the Mediterranean and the final victorious campaign between D-Day and VE Day.

In general studies of the air war fall into two camps - one that focuses almost entirely on the aircraft, and the other that looks at squadrons, theories and strategies, while rarely if ever getting involved in any debate on the technology involved. Terraine manages a rather better balance that this, admitting that a study of the aircraft involved is an essential study of the air watr, as it's the aircraft that make everything else possible. A good example is the number of fighter squadrons in the RAF in 1938 and 1939 - while the number of good example is the number of fighter squadrons and even aircraft hardly changes, the of 1938 have been replaced by an ever increasing number of Hawker Hurricanes and the first Spitfire squadron, making the fighter force far more effective.

Despite its age (now 25 years old), this is an incredibly valuable piece of work, presenting a well researched and fairly comprehensive overview of the RAF's contribution to victory against Germany, looking at its failings (the early bombing campaigns) as well as its achievements (the battle of Britain or the successes of the Mosquito and Lancaster).

The author writes a with a very easy, engaging and thought-provoking style - I enjoyed every page of it.

This is hefty book and represents the investment of a tidy sum of money - all I can say is that it is worth every penny and should have an honourable place on the right of any serious aviation historian's bookshelf.