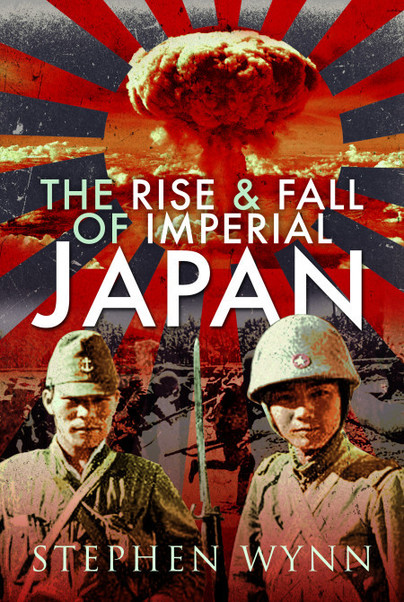 The Rise and Fall of Imperial Japan (Hardback)

Add to Basket
Add to Wishlist
You'll be £19.99 closer to your next £10.00 credit when you purchase The Rise and Fall of Imperial Japan. What's this?
+£4.50 UK Delivery or free UK delivery if order is over £35
(click here for international delivery rates)

The question is, how did a once great nation that built an empire lose it all? From the Meiji Restoration in 1868, restoring Imperial rule under Emperor Meiji, until Japan’s surrender at the end of the Second World War in 1945, the dream lasted a comparatively short period of time: seventy-seven years from beginning to end.

Under Emperor Meiji’s rule, Imperial Japan began a period of rapid industrialisation and militarisation, leading to its emergence as a world power and the establishment of a colonial empire. Economic and political turmoil in the early 1920s led Japan down the path of militarism, culminating in her conquest of large parts of the Asian and Pacific region. The beginning of this path can be traced back to the Paris Peace Conference in 1919, when Japan’s proposal for racial equality was supported and approved by the other members, but overruled by the American President, Woodrow Wilson. Was this rebuttal by the West, and in particular the United States, the moment that changed the course of history?

During the empire's existence, Japan was involved in some sixteen conflicts, resulting in the occupation of numerous countries and islands throughout Asia and the Pacific regions. Thousands were under the emperor's control, not all of whom were treated as they should have been.

The book culminates with the atomic bombs dropped on Hiroshima and Nagasaki, which finally brought about Japan’s surrender and the end of the war in Asia and the Pacific.

An inherently fascinating read from cover to cover...

An inherently fascinating read from cover to cover, "The Rise and Fall of Imperial Japan" is exceptionally organized, expertly written, and is enhanced for academia with the inclusion of a three page Index. Impressively informed and informative.