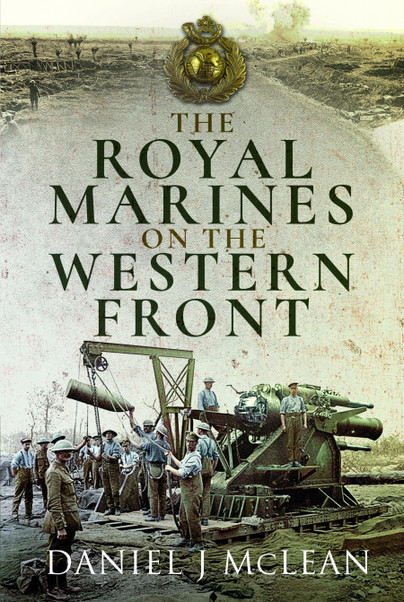 The Royal Marines on the Western Front (Hardback)

Add to Basket
Add to Wishlist
You'll be £15.99 closer to your next £10.00 credit when you purchase The Royal Marines on the Western Front. What's this?
+£4.50 UK Delivery or free UK delivery if order is over £35
(click here for international delivery rates)

From the mud of the Somme to the raid on Zeebrugge, the Royal Marines fought in almost every element of the Great War on the Western Front. Today they are known world-wide as an elite commando fighting force, but that has only been their role since 1940, a fraction of their period in existence. Until 1923 they existed as two corps – the Royal Marine Light Infantry and the Royal Marine Artillery – and both served with distinction along the western front in the great war. This book examines and explains the engagements in which they were involved, the equipment used and the organisation and training undertaken in hitherto unseen detail, drawing on a wide variety of sources to give an accurate picture of their contribution to the war in France and Belgium.

So how does “The Royal Marines on the Western Front” stack up, given that sources such as the men’s service rcords are all now readily available? It is perhaps best viewed as a summary, or an introduction, to the history, for at 132 pages it is clearly a much smaller work than Blumberg’s even when taking into account its focus onto a single theatre of war. Of this, a whole chapter is dedicated to Louis Stokes, a junior marine officer and a former boy of Rugby School whose letters form a valuable archive and whose story was covered in some depth in “A Dear and Noble Boy: The Life and Letters of Louis Stokes, 1897-1916” which was also published by Pen & Sword back in 1994.

Well done, Daniel J McLean, you've put together a useful summary of service of the Royal Marines on the Western Front during the First World War, and you've backed it up with an index, endnotes and a bibliography. Read this alongside, "Tracing your Royal Marine Ancestors" also by Pen & Sword.

A fabulous history of the Royal Marines during the Great War, covering various angles from their experience in Belgium 1914, France 1916, and then both countries across 1917 and 1918.

I found this book very interesting and easy to read.

The chapters on artillery and Zeebrugge are very useful and overall WWI readers will no doubt enjoy this book as I did.

This book is an outstanding reference work on the history of the RMLI, the RMA and the miscellaneous RM units formed during the war. The author has done much research into these formations and the result of this research work is this interesting volume. It will certainly appeal to anyone interested in the history of the RM and I am confident that it will become a standard reference work on their WW1 history. The author should be congratulated on producing this wonderful tome.

What a really good book on everyday soldiering that captures the frustration, disillusion, teamwork, comradery and bravery. This book takes you from the beginning during the Great War on the Western Front such as the Spring Offensive and events like the raid on Zeebrugge. Certainly a book I’ve really enjoyed and would fully recommend.