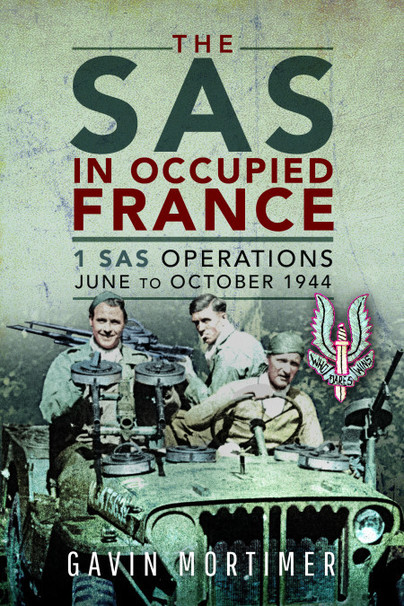 The SAS in Occupied France (Hardback)

Add to Basket
Add to Wishlist
You'll be £25.00 closer to your next £10.00 credit when you purchase The SAS in Occupied France. What's this?
+£4.50 UK Delivery or free UK delivery if order is over £35
(click here for international delivery rates)

In the world of military history there is no brand as potent as that of the SAS. They burst into global prominence in 1980 with their spectacular storming of the Iranian Embassy, and there have been hundreds of books, films, documentaries and even reality TV shows about them. But what there hasn't been is a guide to the scenes of some of their most famous Second World War operations. That is why Gavin Mortimer’s vivid two-volume account of their daring missions in German-occupied France in 1944 is such compelling reading.

SAS actions in France delayed German reinforcements reaching the battlefront in Normandy, later sewing confusion among the Germans as they withdrew. The SAS trained the French Maquis and helped to turn them from an indisciplined rabble into an effective fighting force. Their exploits inflicted heavy casualties on the Germans, and they left a trail of destruction and disorder in their wake.

This first volume focuses on 1 SAS and describes in graphic detail operations Titanic, Houndsworth, Bulbasket, Gain, Haggard and Kipling, all of which were carried out in northern and central France. Using previously unpublished interviews with SAS veterans and members of the Maquis as well as rare photographs, Gavin Mortimer blends the past and present, so that readers can walk in the footsteps of SAS heroes and see where they lived, fought and died.

Following their immense success in North Africa and across the Mediterranean, the SAS were parachuted deep behind the enemy lines amongst the much more restricted geography of Occupied France, to join forces with the Resistance, organise them into an effective fighting force, and lead them in attacks aimed at harassing the German reserves moving up to the front, and generally causing havoc in the rear areas. This very well researched book follows the exploits of 1 SAS in six operations; Titanic, Bulbasket, Houndsworth, Gain, Haggard, and Kipling, describing the progress of each with the aid of a very considerable number of photographs, maps and first hand accounts, many of which are previously unpublished. It is also a battlefield guide, and concisely profiles key areas of interest in each of the operational areas, complete with coordinates and directions.\r\n\r\nRead the full review here

These are just a few chapters of what is a very fascinating book completely different to what I first thought it was going to be but nonetheless an interesting read.

This book breaks into a part story (factual information on the SAS in occupied France) which in itself is just how I would expect the SAS doing to disrupt the enemy during wartime. The other part of this book is a battlefield guide which along with the information on the SAS but shows you places to go and visit key parts of the buildings like the Château de Montfort ruins as it was during the end of the second war and a picture of how it looks now. As a guide to the battlefield, it gives you plenty of pictures and some maps showing the routes taken by 1SAS from the night drop just before the D-Day Invasion

As a battle guide, it is equally as fascinating not that I have ever read one I have seen a few but this is strong in its presentation, which makes for a book easy to read and keep on reading. Now for the part where I say to you what is it going to give you, well it is certainly pictured heavy with destinations including some old photos of some of the French resistance and SAS if you are someone that has been on some of the tours of previous battlefields then I have to say yes go buy it you will not be disappointed.

This book is very much similar to the WW2 tour guide books, in that it presents you with the information about the event and what happened alongside a large number of pictures, photos and maps/diagrams. But like a good tour guide it is interwoven with the specifics of the in this case SAS and the men involved. In all the result is a fascinating read and an immersion in the story/events being told by the author Gavin Mortimer. The pictures are excellent and the photographs of the memorials and people who died during the events add another layer to the story being told. These books about the SAS often tell a slightly different story to normal war type books in that they are more about the individual soldiers which makes them more personal because they all come from different backgrounds. After all, you don’t just join up to the SAS, you have to be selected as one of the best around. I enjoyed the format of this book and it has been an excellent book to read.

If you are the type of person who likes battlefield tours then this book is a real goldmine of specific information, in fact, its format should be used more in my opinion. It uses Google maps to give you exact locations by typing in decimal degrees. A very interesting and well put together book, a must for any battlefield tourist interested in the SAS.

I was one of the millions of people who sat, enthralled as the SAS stormed the Iranian Embassy in 1980 and brough about an abrupt end to the siege. I had little knowledge of the SAS before that, despite reading war stories in comic strip form from the early 1950s. Gavin Mortimer's book traces their history back further and examines the role they played in key operations during WWII. Fascinating!

I loved this book and its tour guide approach but also from a narrative point of view.

The tours are nicely described, accompanied by photos not only rare archive ones, but also with modern colour images showing what is there to be seen to this day. Just remember to read the guide notes about being in some of the forested areas if you are there in the 'Hunting' season. It made me keen to see the back of the current Covid restrictions on travel, and look forward to the day when we can get back out to France and start exploring again.

Gavin Mortimer is a writer, historian and television consultant whose ground-breaking book Stirling's Men remains the definitive history of the wartime SAS. Drawing on interviews with more than sixty veterans, most of whom had never spoken publicly, the book was the first comprehensive account of the SAS brigade. He has also written histories of the SBS, Merrill's Marauders and LRDG, again drawing heavily on veteran interviews. Gavin was the historical consultant on the 2017 BBC documentary about the wartime SAS and he has guided several serving members of the SAS around the sites in France where their predecessors operated in the summer of 1944.