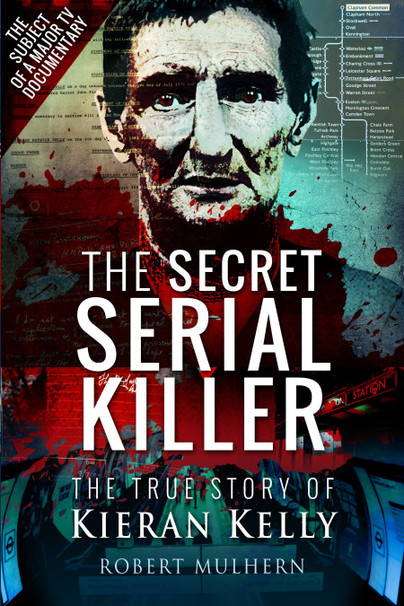 The True Story of Kieran Kelly

As seen in The Irish Post, June 2019: 'New book throws up surprise twists in case of Kieran Kelly, Irishman reputed to have killed 31 people'.

You'll be £4.99 closer to your next £10.00 credit when you purchase The Secret Serial Killer. What's this?
Need a currency converter? Check XE.com for live rates

On the evening of 21 August 1983, Metropolitan Police detectives raced to the cells of London’s Clapham Police Station to find a prisoner dead and his cellmate sat cross-legged and quiet in the corner.

Kieran Kelly, a labourer from Ireland, quickly confessed to strangling the prisoner – and then stunned officers by confessing to dozens of unreported and unsolved murders over the previous 30 years.

Detectives believed they were in the presence of Britain’s most prolific serial killer yet Kelly was convicted on just two of his admissions and his story went unnoticed until 2015, when a former police officer who worked on the case claimed the killer’s crimes were covered up by the British Government.

Strangulations, murders on the London Underground, an internal Metropolitan Police review – as the story’s elements whipped the international news media into a frenzy, journalist Robert Mulhern set off on a methodical search for the truth against the backdrop of an ever-increasing body count.


There’s some really good investigative work in this book, with multiple interviews from the people who were there.

This is a fascinating subject and the book is well written and incredibly interesting. There remains questions to be answered about Kelly but he's the only person who could ever give those answers.

Fans of true-crime stories will really enjoy this


Random Things Through My Letterbox

Article: 'The hunt for a Laois serial killer' as featured by

Sensational claims are set to emerge in a new book that an Irishman who went on to be one of Britain's most notorious serial killers may have committed his first murder in Ireland.

Book extract/article: 'On the trail of Kieran Kelly – the Secret Serial Killer' + author Q&A as featured by

Author article: 'A KILDARE MAN IN LONDON: Hot on the heels of a serial killer’s trail' as featured by

Article: 'Irish “Secret Serial Killer” responsible for up to 30 London murders' as featured by

Article: 'An Irish Serial Killer? - Doc on One goes to print' as featured by

As both a true crime and English detectives lover I was immediately drawn into this story. I had previously spent two years delving into the history of crime in London during the Victorian period and while Kelly’s crimes and the investigations surrounding them fall closer to the present, it was still something I couldn’t put down. Through eyewitness testimony, Kiernan Kelly’s case has been rebuilt with new evidence from Britain and Ireland, which is full of twists and turns that will keep readers hooked until the very end. The murders Kelly committed are seen as something that would not have wide appeal or interest. The fact that he killed those often identified as drunken vagrants seems to have limited the urge to investigate, which speaks to a cultural issue that arises within true crime topics. Kelly’s hidden crimes show that victims who are considered outside of mainstream society do not often receive the attention they deserve.

It is an interesting book overall I thought, with a level of impressive research that makes it THE definitive study of a case that is destined to forever remain one that tantalises and intrigues the student of true crime.

Mulhern uncovers a Jekyll and Hyde personality along with a host of missing and inaccurate police files.

He worked as a reporter and editor for the BBC, Sky and The Irish Post, after graduating from local papers. He is currently contracted to RTÉ Radio 1’s Documentary on One series in Ireland. Mulhern is a three-time World Radio award winner at the New York International Festivals, as well as a previous Celtic Media award winner. His work has been short-listed for Amnesty International Media awards.