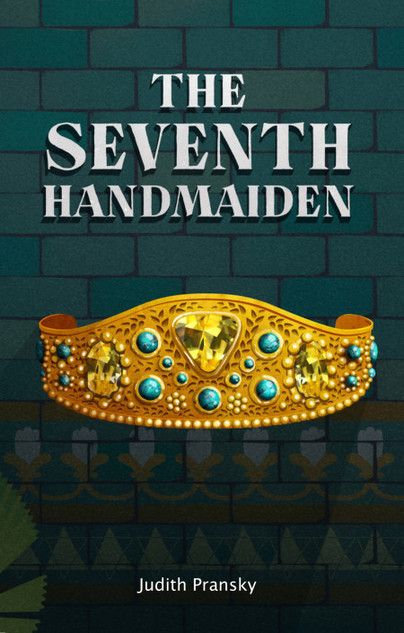 Add to Basket
Add to Wishlist
You'll be £9.99 closer to your next £10.00 credit when you purchase The Seventh Handmaiden. What's this?
+£4.50 UK Delivery or free UK delivery if order is over £35
(click here for international delivery rates)

Darya does not remember how she came to be a slave or who she was before she was bought by an army captain for his motherless daughter in the ancient Persian city of Susa. Protected and nurtured by the housekeeper and her daughter, Darya has as good a life as a slave can have, even acquiring the rare skill of reading and writing, which she learns alongside her young mistress. When the captain dies and the household is broken up, this skill proves to be her lifeline. She becomes the seventh handmaiden to the mysterious Esther, who is being housed at the Royal Palace while in contention to be King Xerxes’ new Queen.

However, life in Ancient Persia is precarious for women and outsiders, wherever they are in the hierarchy. When the King appoints a new Prime Minister called Haman, Darya and Esther are drawn into his murderous conflict with the Judean community and Mordechai, their leader, who lives just outside the palace gates.

In a world of discord and uprising, Darya seeks to fix the world around her and protect her friends, while also trying to unravel the mysteries surrounding who she is and how she became a slave. As she grows from childhood to womanhood she grapples with her own identity, her aspirations and desires and begins to understand the true meaning of both slavery and freedom.

What a wonderful story. Though I am not Jewish, I enjoyed learning about these characters and events. The author did a fabulous job of making the characters learn and grow, and I looked forward to seeing their story to the end. The details of the setting were enough to keep me grounded, but not so much that it overwhelmed me and took me away from the characters. An excellent book for older readers.

I loved the way Pransky tied in the culture and references to the handmaidens with a middle grade twist. Yes, as an adult reader I saw many of the plot points coming but a middle grade reader would not. It isn't often that I find a book that celebrates a Biblical/Jewish heroine and I thoroughly enjoyed it.

I really enjoyed this book! I love how Pransky put lots of thought behind the historical aspects of the plot 😁 The storyline was really entertaining and the plot twist at the end I did not see coming! Although, thinking back on the plot there were many points that alluded to what happened at the end of the book. I also think that the time jumps were well done and helped the story move along at a good pace. The writing style was also very simplistic since this is intended to be a middle-grade book. Overall this was a great story 😊

I want to see where the story could go for here, and personally, fingers crossed for a sequel! Overall, I loved this book, and I recommend it if you're into historical fiction.

Judith Pransky is a writer, editor and teacher who taught English and History in middle school classrooms for 20 years. She has edited guides to Philadelphia and published two books for children, Mister Lister and Mister Lister Strikes Again.