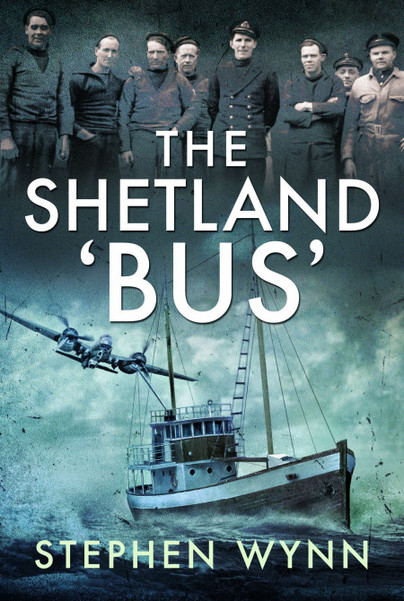 Add to Basket
Add to Wishlist
You'll be £19.99 closer to your next £10.00 credit when you purchase The Shetland 'Bus'. What's this?
+£4.50 UK Delivery or free UK delivery if order is over £40
(click here for international delivery rates)

The Shetland Bus was not a bus, but the nickname of a special operations group that set up a route across the North Sea between Norway and the Shetland Islands, north-east of mainland Scotland. The first voyage was made by Norwegian sailors to help their compatriots in occupied Norway, but soon the Secret Intelligence Service and the Special Operations Executive asked if they would be prepared to carry cargoes of British agents and equipment, as well. Fourteen boats of different sizes were originally used, and Flemington House in Shetland was commandeered as the operation's HQ. The first official journey was carried out by the Norwegian fishing vessel the Aksel, which left Luna Ness on 30 August 1941 on route to Bremen in Norway.

This book examines that first journey, as well later ones, and discusses the agents and operations which members of the Shetland Bus were involved in throughout the war. It also looks at the donation of 3 submarine chasers to the operation, made in October 1943, by the United States Navy. These torpedo-type boats were 110 ft long and very fast, allowing journey times between Shetland and Norway to be greatly reduced and carried out in greater safety.

The story of the Shetland Bus would be nothing without the individuals involved, both the sailors of the boats and the agents who were carried between the two countries. These were very brave individuals who helped maintain an important lifeline to the beleaguered Norwegians. It also allowed British and Norwegian agents a way in to Norway so that they could liaise with the Norwegian Underground movement and carry out important missions against the German occupiers.

"There's a bit of everything here, from the overall military situation to the Norwegian agents and boats of the Shetland Bus itself."

A book that is both an interesting read and a valuable reference work for anyone studying 1940's Norway and it's close relation to the Shetlands.

As a factual account of operations this new title tries to be as comprehensive as possible, listing all the operations, the ships and the Norwegian men involved so might be a good starting point for those wanting to learn more about this very distinct long term operation.

"The story will probably be appreciated most by those who already have an interest in military history."

Featured in 'Cover to Cover: A Look at the Latest Scottish Books' by Megan Williams - November 2021

This is very good book about an often forgotten contribution to the eventual victory and I would highly recommend it.

One chapter includes a summary of the Norwegian Agents. This is useful for finding out more about the key individuals involved. Another chapter provides detail on the boats and men of the Shetland Bus, such as Leif Larsen who skippered M/K Bergholm, which was attacked and sunk by German aircraft. The surviving crew managed to row their boat to Norway where they remained until they were able. To return to Shetland on board another vessel.  Another chapter provides a very useful chronological summary of British operations in Norway throughout the war. These useful chapters ensure that this book is a very useful reference work on The Shetland Bus operation, and a valuable addition to the heritage surrounding this special story.

Having read a book with a similar title years ago I was keen to see if this publication was a reprint and if so to reacquaint myself with the story.
However this book takes a totally different approach. The original story of this title told of individual trips made from Shetland to ports in Norway during WWII, usually in small fishing boats, and the brave men, Norwegians and Special Operations Executive (SOE), who volunteered to carry acts of reconnaissance, intelligence gathering and sabotage.
However the book reviewed today covers so much more. The author tells of the German invasion, the collaborators, the cruelty carried out by the ruling authorities. There are chapters that tell of the individual operations carried out, the successes and failures, the operatives, and their fates. Additionally the author includes a section on words spoken by Winston Churchill when reporting to parliament and another showing press articles both British and from occupied Norway.
I was amazed to learn just how much collaboration certain sections of the Norwegian populace carried out despite me knowing previously what the word ‘Quisling’ implied. However this treachery was opposed by very brave men some of who went to extraordinary lengths to escape the Nazis and to travel to the UK so as to continue the fight against the oppression their country was suffering.

In conclusion as I stated earlier this is one of the books that reveals that a war of resistance in the west was not just fought in France and the Low countries but in Norway as well, in conditions that were quite inhospitable in particular during the long northern winters.

A moving tale of grit and determination of men pitted against the rough and unforgiving waters of the North Sea.

With the German invasion of Norway, Britain faced a serious threat from German naval vessels operating out from and into the North Sea, Atlantic and Arctic waters, but those were not the only threats. The proximity of the Shetland Islands to Norway meant that many Norwegians were able to cross in small fishing boats to escape the Germans, and for secret agents and commando groups to travel from the Shetlands to Norway in fishing boats, submarines and Coastal Forces vessels, The Shetland ‘Bus’ was born. – Very Highly Recommended

A great book about individual spies and sailors from both sides of the water putting their lives at great risk. I really enjoyed this book and it was written in a bit of diary style, plenty of information and photographs. I certainly recommend this book to all.

The Shetland Bus is an inspirational tale and this new telling properly acknowledges the bravery of the Norwegians involved.