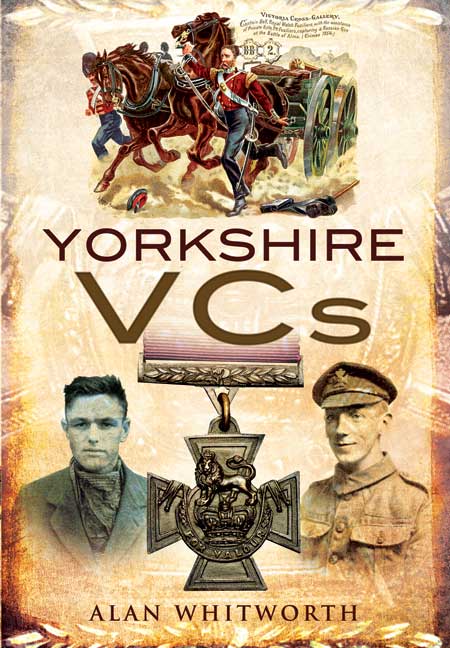 Click here for help on how to download our eBooks
Add to Basket
Add to Wishlist
You'll be £4.99 closer to your next £10.00 credit when you purchase Yorkshire VCs. What's this?
Need a currency converter? Check XE.com for live rates

Today the Victoria Cross remains the supreme British award for bravery. It takes precedence over all other awards and decorations. During its 160-year history, since the first medals were given for gallantry during the Crimean War in the 1850s, 1,357 of these medals have been won, and no less than 69 of them have gone to Yorkshiremen. Alan Whitworth, in this carefully researched and revealing account, describes in graphic detail the exploits and the lives of this elite group of heroes.

Among the roll of the brave whose gallantry and self-sacrifice are celebrated in these pages the reader will find the names and extraordinary deeds of men who were either born or bred or lived and died in Yorkshire. The first was Yorkshire-born Bombardier Thomas Wilkinson in 1857. He set an example that has been followed by generations of Yorkshire soldiers through the conflicts of the late nineteenth century – among them the Indian Mutiny and the wars in Afghanistan and South Africa – and then, in the twentieth century, in the two world wars and more recent operations in the Gulf and Afghanistan. Their stories give an unforgettable insight into the nature of heroism and into the role of individual soldiers who stand out from the ranks of men who took part in Britain's many wars and campaigns.

The stories of these ordinary individuals who have 'performed some signal act of valour or devotion to their country' will be fascinating reading for anyone who is interested in military history in general and in the long military tradition of Yorkshire.

4 stars The combination of Whitworth and Arthur’s research makes for a very readable book into which to dip for interest, rather than merely a dry-as-dust work on a remote shelf marked “For Reference ONLY”. Well worth buying, including by those not of a military mindset, for the family histories.

"A difficult book to challenge, especially when the subject matter is so worthy."

The Victoria Cross has become the premier award for courage in the face of the enemy, with many being awarded posthumously. The medal is both important to Britons and recognized around the world as the highest honour to soldiers, sailors and airmen – Highly Recommended.

Yorkshire has a very strong military tradition, both for the historical facts that happened in that piece of England, and for the units that were formed in those parts. And as can be seen from the list also for the value of the men grown in those lands. A book of great interest to the military history buff and another great book in the vast library of the Pen & Sword publishing house dedicated to Victoria Cross.

Here is another excellently researched and produced book about regional recipients of the VC. Here we read about the 69 Yorkshiremen who have been awarded the Cross.

Well researched and packed with information on the county's heroes. [Yorkshire VCs] may appeal mainly to readers from Yorkshire, but it is a good account which will be appreciated by both historians and general readers, as it provides detailed and absorbing accounts of each recipient of the VC.

Over a century and a half has gone by since the names of the first group of VCs appeared in the London Gazette. And since 1857, nearly 70 of the 1,357 individuals to receive the supreme award have either been born in Yorkshire or had some significant connection with the county. This is, as author Alan Whitworth remarks in his illuminating introduction, an exclusive company, the sole criterion for membership of which is courage.

First conferred for gallantry during the Crimean War of the 1850s, subsequent awards have come to reflect deeds of the most awe-inspiring heroism demonstrated in all manner of conflicts, on land, at sea and in the air. A number of stories concern men whose determination to see their mission through led them to persist despite truly terrible injuries, and these are as humbling as they are breathtaking.: we learn of the exploits of Sgt. Firth in the Boer War; the Leeds Policeman VC John Crawshaw Raynes in the France of 1915 and of airman Arthur Aaron over Italy in 1940. From Leading Seaman Magennis, we discover how he attempted to deal, emotionally, with traumatic and life-threatening situations. His comments have an arresting frankness. We also get a sense of how nerve-racking his ordeal in The Far East must have been (see p. 152).

Posthumous recipients of the honour are not neglected and those remembered here include Hull man John Harrison, who fell during the First World War and Sheffield-born Ian McKay, who lost his own life in the Falklands in 1982.

Beyond the wealth of biographical information provided, the history of the VC is explored from several different and highly original angles. How was it that one holder came to be denied admission to the Home Guard? Why did politicians find themselves divided over the award received by Seaman Magennis? In what circumstances could a holder lose his VC? And in what ways have requirements for eligibility changed over the years? The answers to all these questions and more will be found in this book, and those with a specialist interest will doubtless appreciate the updates provided on the stories of Lambert (p 143) and Raynes (p 173), plus the fascinating insights provided into social class and the military in 1914 (p 122).

The whole is preceded by useful historical notes contributed by Max Arthur on a wide range of modern British campaigns from the Crimea to Afghanistan that should prove invaluable in helping the reader contextualise each of the stories that follow. There's even an interesting twist as to how the Crosses themselves are made.

Mr Whitworth's research is meticulous and may inspire further reading on this important subject.

The Victoria Cross remains the supreme British award for bravery, taking precedence over all other awards. Alan Whitworth looks at these brave men and the deeds that saw them awarded this most prestigious of medals.

This is a humbling book to read, seeing how time after time these brave men put their lives on the line to save others. It makes for great reading, especially if you happen to be a Yorkshireman!

A new book celebrating the Yorkshire heroes who were awarded the Victoria Cross for conspicuous gallantry.

Yorkshire VCs is a concise and useful reference that is well presented by the author. Recommended.