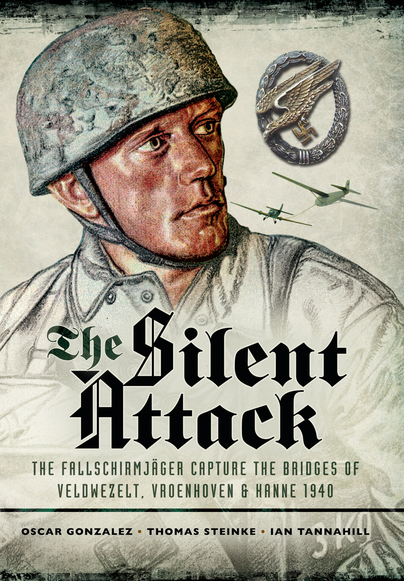 The Taking of the Bridges at Veldwezelt, Vroenhoven and Kanne in Belgium by German Paratroops, 10 May 1940

Click here for help on how to download our eBooks
Add to Basket
Add to Wishlist
You'll be £4.99 closer to your next £10.00 credit when you purchase The Silent Attack. What's this?
Need a currency converter? Check XE.com for live rates

Much has been written about the capture of Fort Eben Emael Belgium by German paratroopers, on May 10, 1940. This operation marked the first use of gliders and shaped charges, while proved possible drop paratroopers behind enemy lines. The training, secret, accuracy and speed, in addition to the element of surprise, these men became lethal, causing chaos among Belgian soldiers.

However, it should be stressed that these paratroopers were part of a larger group: The Sturmablteilung Koch (Koch Assault Group), the elite of the Luftwaffe in 1940, whose mission was not only to take Eben Emael, but also the three bridges over the Alberto canal near: Veldwezelt, Vroenhoven and Kanne. The success of the attack on Belgium and France would depend on the rapid conquest of those bridges.

The aim of this book is to show how it was planned and carried out the assault on the Albert Canal bridges. All this not only through a supported text documents, records and evidence, but also by many photos never published until now. Every detail, from the creation of the Koch Assault Group, until the final attack, has been closely scrutinized by reference to the best sources, as well as testimonies of Belgian and German soldiers.

About the authors: Óscar González López has a degree in Philosophy and teaches History and Philosophy. As a military historian his research has focused on the Fallschirmjäger as well as the Spanish volunteers in the German Army during the Second World War, through close contact with many former veterans. Amongst other books, he has published Fallschirmjäger at the Gran Sasso and German Paratroops in Scandinavia. He lives in Spain.

Thomas Steinke studied at the Otto-von-Guericke University in Magdeburg, Germany. He takes part in the 'Volksbund Dr. Kriegsgräberfürsorge', being involved in the search and care of German War graves of the Second World War, as well as in educational activities whose main goal is to improve the mutual and peaceful understanding amongst the European people. The focus of his studies has long been German paratroopers, in particular the members of the Sturmabteilung Koch and the LL-Sturmregiment.

Ian Tannahill holds a Bachelor of Engineering degree from the University of Queensland, Australia, and is a registered patent and trade mark attorney. His interest in the Fallschirmjäger was sparked by an article he read as a teenager on the fall of the fortress of Eben Emael. His contact with former German paratroopers ignited a desire within Ian to tell the world about the capture of the Albert Kanal bridges by the Fallschirmjäger and glider pilots of Sturmabteilung Koch.


Everything makes the book extremely enjoyable without weighing the story too much and you are helped by the references of the maps present in the book.

The audacious attack by German airborne forces in May 1940 on the modern Belgian fortress of Eben Emael is well documented; on the other hand, the assault on the three adjacent bridges crossing the Albert Canal near Maastricht is less well known. This book sets out to correct the balance and in a very detailed manner.
The authors are to be commended on a very thoroughly put together piece of work.

I found the book very interesting and well written with a wealth of detailed information on this very explicit piece of history.

The Battle of France depended on surprise attack by large mechanised and armoured forces. This depended on attack through Belgium, and that depended on overwhelming the Belgian forts guarding key river crossings. The authors have produced an enthralling account of how German Special Forces fought to take and hold the key river crossings to allow the main German Army to swarm into France. Very Highly Recommended.

The spectacular capture of the Belgian fortress of Eben Emael by a small group of German paratroopers in May 1940 is a story which has been told many times, but often to the detriment of the simultaneous attacks on the neighbouring bridges over the Albert Canal at Velowezelt, Vroenhoven and Kanne. This book reverses that trend, and ignores the fort completely to focus entirely on the planning, capture and defence of these bridges; an operation which, in a matter of hours, swept aside a defensive position which had been intended to delay an entire army for weeks. It is an impressive and beautifully presented book, with a meticulously researched, clear and readable narrative which is generously supported by innumerable photographs, first-hand accounts and a complete list of all those who took part. This must be considered an important addition to the library of airborne literature.