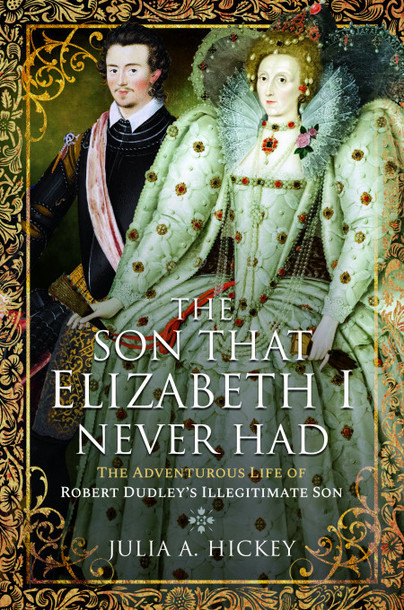 The Son that Elizabeth I Never Had (Hardback)

Add to Basket
Add to Wishlist
You'll be £17.60 closer to your next £10.00 credit when you purchase The Son that Elizabeth I Never Had. What's this?
+£4.50 UK Delivery or free UK delivery if order is over £40
(click here for international delivery rates)

Sir Robert Dudley, the handsome ‘base born’ son of Elizabeth I’s favourite, was born amidst scandal and intrigue. The story of his birth is one of love, royalty and broken bonds of trust. He was at Tilbury with the Earl of Leicester in 1587; four years later he was wealthy, independent and making a mark in Elizabeth’s court; he explored Trinidad, searched for the fabled gold of El Dorado and backed a voyage taking a letter from the queen to the Emperor of China. He took part in the Earl of Essex’s raid on Cadiz and was implicated in the earl’s rebellion in 1601 but what he wanted most was to prove his legitimacy. Refusing to accept the lot Fate dealt him after the death of the Queen, he abandoned his family, his home and his country never to return. He carved his own destiny in Tuscany as an engineer, courtier, shipbuilder and seafarer with the woman he loved at his side. His sea atlas, the first of its kind, was published in 1646. The Dell’Arcano del Mare took more than twelve years to write and was the culmination of a lifetime’s work. Robert Dudley, the son Elizabeth never had, is the story of a scholar, an adventurer and Elizabethan seadog that deserves to be better known.

Interesting, very interesting. A look into the court of Elizabeth the 1st and the politics surrounding her and her court.

This was an interesting read, I knew of her favourite Robert Dudley obviously, but I didn't know so much about the other people within the pages of the book. A really interesting, informative and well researched read.

His birth began as one of broken bonds of trust - Queen Elizabeth had long been in love with his father. He spent time at Tilburg in 1597, and yet four years later we find him independent, wealthy, and a mark for himself in Queen Elizabeth's Court. He travelled, explored, taking a letter to the Emperor of China from Her Majesty Queen Elizabeth. He created a sea atlas, the first of its kind, that he had published in 1646. I strongly recommend this book to lovers of Elizabethan historian. It was absolutely fascinating and I had a very difficult time putting it down.

About Julia A Hickey

Julia has been passionate about history since she visited Buckland Abbey as a child more than forty years ago. She has an MA as well as a BA in History and English Literature. She has taught in a range of educational settings but is currently an independent lecturer and speaker based in the Midlands and Yorkshire. In addition to a text for Literacy Specialists she has written about border reivers, the grisly tale of Carlisle’s gallows and is the author of many short stories set in the past. She writes a regular blog at thehistoryjar.com about all things historical and can often be found exploring castles and stately stacks.