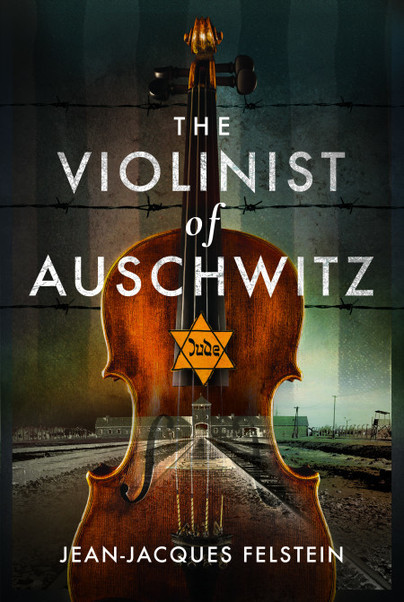 The Violinist of Auschwitz (ePub)

Click here for help on how to download our eBooks
Add to Basket
Add to Wishlist
You'll be £8.99 closer to your next £10.00 credit when you purchase The Violinist of Auschwitz. What's this?
Need a currency converter? Check XE.com for live rates

Arrested in 1943 and deported to Auschwitz, Elsa survived because she had the 'opportunity' to join the women's orchestra. But Elsa kept her story a secret, even from her own family. Indeed, her son would only discover what had happened to his mother many years later, after gradually unearthing her unbelievable story following her premature death, without ever having revealed her secret to anyone.

Jean-Jacques Felstein was determined to reconstruct Elsa's life in Birkenau, and would go in search of other orchestra survivors in Germany, Belgium, Poland, Israel and the United States. The recollections of Hélène, first violin, Violette, third violin, Anita, a cellist, and other musicians, allowed him to rediscover his 20-year-old mother, lost in the heart of hell.

The story unfolds in two intersecting stages: one, contemporary, is that of the investigation, the other is that of Auschwitz and its unimaginable daily life, as told by the musicians. They describe the recitals on which their very survival depended, the incessant rehearsals, the departure in the mornings for the forced labourers to the rhythm of the instruments, the Sunday concerts, and how Mengele pointed out the pieces in the repertoire he wished to listen to in between 'selections'.

In this remarkable book, Jean-Jacques Felstein follows in his mother's footsteps and by telling her story, attempts to free her, and himself, from the pain that had been hidden in their family for so long.

As there are now fewer and fewer survivors alive to give their account, it is unsurprising attention is now shifting to the children of those who have now passed away. This is one such example and has been written by the son of a woman who survived because she was part of an orchestra in the concentration camps.

Elsa found relationships difficult and was emotionally detached from her son. Following her death, he decided to track down others who were in the same situation, those who survived by being part of this bizarre orchestra and who remember his mother. (although not all do.)

Through this, he is able to build a picture of his mother. To construct her narrative that was always hidden from him during her lifetime and to find a way to lead to his understanding of her.

This is a book that is well worth reading.

Interesting book and allowed me to learn even more about Auschwitz, what people had to suffer through when imprisoned in the camps and how the survivors reflect on their experiences.

Obviously due to the subject of the book it`s an emotional and hard hitting read but worth reading...
So glad I read this though to learn more about Auschwitz and the survivors.

A harrowing and worthwhile story about the women's orchestra in Auschwitz and one man's attempt to learn more about his mother's secret past.

The Violinist of Auschwitz is a powerful true story of survival against all odds.

I give the Violinist of Auschwitz five out of five stars!

My immediate thoughts upon finishing this book were that it was a very moving read. I feel it was as much about Jean-Jacques, his mother Elsa, and the other survivors as well as the ins and outs of how the Orchestra was formed and what those women were expected to do, all in equal parts.

Summing up, this book begins as a record of a rather fraught relationship between a boy, then man with his mother. A mother that had been through a horrible time whilst being held prisoner in Auschwitz-Bikenau. His mother Elsa is so traumatised even years and years later that she can never bring herself to speak to her son about what went on there. So, after his mother’s death, he sets himself the task of tracing and contacting the other women that played in the Birkenau Orchestra. Jean-Jacques travels to meet these other strong women who survived who are willing to tell him their own story, as well as what they remember about the Orchestra and his mother Elsa. If you are fascinated about this dark, era of history, then this book is a must read for you, it is so much more than a memoir.

Memoirs always break my heart and this was no different. I loved and devoured this within a few days. I just cannot believe what everyone had to go through during this horrific time. Everyone needs to read this.

My heart goes out to Jean-Jacques Felstein; I could literally feel his heart breaking as he researched the details of his mother's time as a violinist in the concentration camps. His mother wouldn't discuss this with him and after she passed away, he discovered these stories from behind the walls.

I've read many books about WWII and concentration camps, but I don't recall ever reading about orchestras. I found it interesting, but also heartbreaking. I'm glad that I read The Violinist of Auschwitz.

This was such a beautifully raw and emotive read that will stay with me for a long time. The fact that Elsa kept her past to herself for so many years and it was only discovered by her son after her death just added an added depth of emotion to the book. It was so well written and brought me to tears on practically every page.
Through the recollections of other musicians from Auschwitz that he found during his investigation he discovered who his mother was as a young woman and how she kept strong in the midst of the fires of hell.
A truly stunning book that everybody should read. I loved it.

The Violinist of Auschwitz is a poignant, dreadful, crushing, evocative and compelling true story about the author who is desperate for answers to deeply-engrained questions about his murky existence. His memories of his mother haunt him and he needs a "benchmark" of who she was. She did not tell him she was a prisoner at Auschwitz or why she had only a part of a violin. Perhaps if she had lived longer...

In 1997 Jean-Jacques Felstein's search took him to several countries to visit the few Women's Orchestra survivors to interview them as well as to concentration camps. The author narrates two timelines, WWII and 1997, and writes from his perspective to his mother, Elsa, as well as from hers to his. The writing, sentiments and insight are so gorgeous and so beautiful they often moved me to tears. And then the story itself. My words are inadequate but this book took my breath away, one of the most memorable books I have ever read.

Elsa joined the Women's Orchestra at Auschwitz in 1943. Though music was intended for the pleasure of Nazis, it saved lives by giving the women a purpose and alleviated their abuse for a few short hours. However, this tormented the other thousands in the camp and their jealousy caused problems for the musicians. Horrendous barbaric atrocities are not glossed over but told in great detail. They actually happened to human beings who barely existed in a constant state of torment. Several women were highlighted in the book as well as a list of orchestra members.

Little (but big) details stand out such as the unnecessary vase and rice pudding stories. I was not aware of the Russian violin method! The orchestra conductor and musicians mastered 150 songs and made a tremendous impact, even on Nazis. Such a juxtaposition of music and "the ramp" so near by.

The photographs are remarkably personal, especially the one of the author as a child waiting to leave for Cologne. At the end, the author writes about the women's lives after their experiences and connects them. He discovers women who knew his mother.

My sincerest thank you to Pen & Sword for the honour of reading this powerful and emotive book. My special appreciation and gratitude to the author who spent endless hours of research and interviewing so that he and others may know about the past .

I am completely aware that this must have been quite the cathartic experience for the author and I want to express my gratitude in publishing this account. I’m thankful for the opportunity to read this moving research and for the reminder that my horrified reaction is a good thing – for when people stop reacting to what happened in those camps, then we can’t call ourselves ‘human’ any longer.

A beautiful story.. I couldn't put this down! Beautiful writing kept me turning the pages! It is so heartbreaking what these people went through, and this story is a wonderful testament to their courage and grit.

I loved the alternating POV in the timeline of how this memoir was told and glad the author shared this story. It is not easy reading but these stories deserve to be told when there is a glimmer of hope in hell on Earth.

The story of a camp violinist and her subsequent years following liberation, The Violinist of Auschwitz is told by the violinist’s son. He details the time of the orchestra’s presence in camp while trying to understand his mother’s distanced relationship with him. He interviews several orchestra members, detailing the remaining effects of camp life on each one.

I am surely going to be thinking about The Violinist of Auschwitz for a long time.

I enjoyed it very much and would recommend to serious students of WWII and the Holocaust, this is a don't miss book for them.

A truly inspirational book. The stories told are heartbreaking. The author’s writing style is to tell the story like a diary entry and to make you part of it. A great read.

The story told was beautiful and well written. I have read many a book about the Holocaust and this was incredibly touching.

Books about World War II catch my attention, I find them so interesting. And I can say that this book taught me a lot. They way jewish people got treated just broke my heart, it‘s insane.

Jean-Jacques Felstein was born in 1948 and began his studies at Nanterre in 1968. He achieved a diploma in specialist education in 1976, followed by a degree in English and a diploma in languages and communication sciences.

He worked in education for twenty-three years, before becoming the department head in a child protection unit at the Seine-Saint-Denis General Council. Here he acquired expert knowledge on concepts such as heritage, parentage, abuse and incest.

During these years, he practised music and played guitar in a hard rock group, performing in numerous concerts.

He died in Paris in 2015, following a long illness.