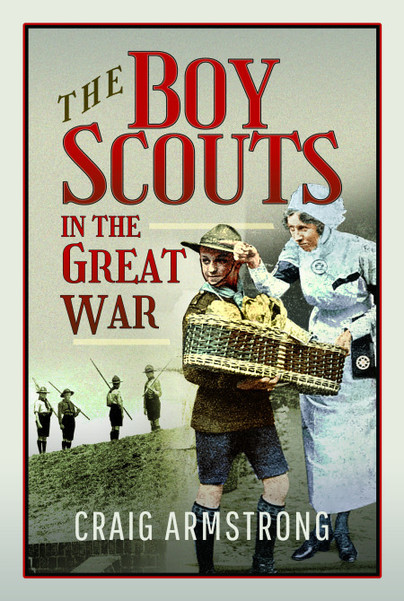 The Boy Scouts in the Great War (ePub)

Click here for help on how to download our eBooks
Add to Basket
Add to Wishlist
You'll be £4.99 closer to your next £10.00 credit when you purchase The Boy Scouts in the Great War. What's this?
Need a currency converter? Check XE.com for live rates

"This interesting book by Craig Armstrong delves into the world of the boy scouts and the contribution they made on the home front and in France delivering messages."

Having heard a talk by my friend and scout leader during his village’s centenary commemorations, I thought I had a decent idea of the role that the Boy Scout movement had during the Great War. Boy was I wrong.

Craig Armstrong gives a comprehensive account of the multiple challenges the Boy Scout rose to during the Great War. This book has good clear structure that leads the reader through a logical arrangement of chapters. His writing style is easy to follow and appreciate whether you come from a Great War view point or a Scout movement one. There really is something for both the specialist or casual reader.

The stories of the individuals further ensures this book is a suitable reference and tribute to these men. As part of the military service section for 1916, a summary is given of the Berwick Boy Scouts and their Roll of Honour. Also, there is wider detail on how on first day of the Battle of the Somme, their wre several former Scouts who were among those who lost their lives. One of the former Berwick boys was Private G.S. Wilson, who served with the Royal Scots. He was killed during the intense fighting near Delville Wood, and is buried at Delville Wood Cemetery. Another, Sergeant Harry Cator who served with the East Surrey Regiment. He went out into no man's land and rescued thirty-six wounded men who were lying there. For this piece of bravery, he obtained the Military Medal. Furthermore, the book intertwines how at least twenty-one former Scouts were awarded the Victoria Cross during the war. One, Robert Cruickshank, who served with the London Scottish. In action at Salonika, Robert was wounded a couple of times moving up a slope delivering a message.

Overall, this is book will interest many, not least those who have an further interest in the history of youth movements in Britain.

"The book proved an interesting read."