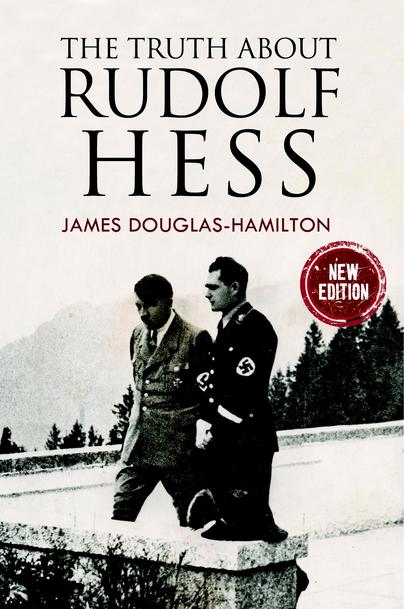 The Truth About Rudolf Hess (Paperback)

As featured on Antiques Road Trip (episode 12 – 19/9/2016), where the author helps presenter James Braxton to discover the story behind one of the most intriguing incidents of World War II

You'll be £11.25 closer to your next £10.00 credit when you purchase The Truth About Rudolf Hess. What's this?
+£4 UK Delivery or free UK delivery if order is over £30
(click here for international delivery rates)

The unauthorised solo flight to Britain by Hitler’s Deputy Rudolf Hess in May 1941 still stands out as one of the most bizarre and intriguing episodes of World War II.

In a new expanded and updated Paperback Edition of his book “The Truth about Rudolf Hess” James Douglas-Hamilton examines the background to this extraordinary affair and the myths which surround it. He traces the developments which persuaded Hess to undertake his deluded attempt to broker a peace deal and remove Britain from the War, so that Hitler would not have to fight on two fronts when his planned attack on Russia was launched.

The author also examines the unsought involvement of his father the Duke of Hamilton in the story when, although they had never met, Hess asked to speak to him after he parachuted into Scotland.

The part played in this affair by the previously little known Professor Albrecht Haushofer, an academic and Anglophile, who acted as Hess’ consultant, is highlighted and his doomed journey through the horrors of Nazi Germany leading him to a terrible fate is recounted.

Material contained in the most recently released Foreign Office papers is also analysed in this new Edition and the author looks at how Germany has attempted to confront and deal with its Wartime past.


Douglas-Hamilton's book does justice to this hero.

The latest tranche of previously secret government files examined in the book show how determined the government was to disprove the claim that the man imprisoned in Spandau Prison was not in fact Hess but was a double. They also cast light on the reasons for the Russian authorities’ implacable determination that Hess should never be released.

The author’s research shines a spotlight on the important part played in the Hess saga by his consultant Albrecht Haushofer.

The author's research shines a spotlight on the important part played in the Hess saga by his consultant Albrecht Haushofer.

The extent of the author's personal victory over unduly secretive officials is evident in this memorable and moving book.

Many questions have been asked over the years about Hess's doomed peace mission. Was he insane? Did Hitler have any advance warning? How did his plan elude British radar? Why didn't Churchill exploit this propaganda gift to embarrass Hitler? Why did Hess remain in prison until his suicide in 1987, long after other Nazi leaders had been released? Definitive answers can be found in this absorbing book.

This is an excellent read quite apart from being a credible analysis of the events surrounding Hess's decision to come to Britain. New evidence enables the author to dismiss many of the conspiracies surrounding the most bizarre event of the war. He does this very effectively, leaving little left uncertain. An interesting amount of attention is paid to Albrecht Haushofer who was hugely influential in Hess's decision to come to this country and to seek out the Duke of Hamilton whom he had never met. This book is a must for those interested in war history but it is also a rewarding read for those with a more casual interest. It is a very important contribution to war history.

in a new and expanded edition of this book, drawing on wartime documents and reports (including many which were only declassified just in time to be included) James Douglas - Hamilton, the son of the Duke of Hamilton, has revealed the truth about Hess, and in doing so, produced one of the most absorbing books I have read for a long time.