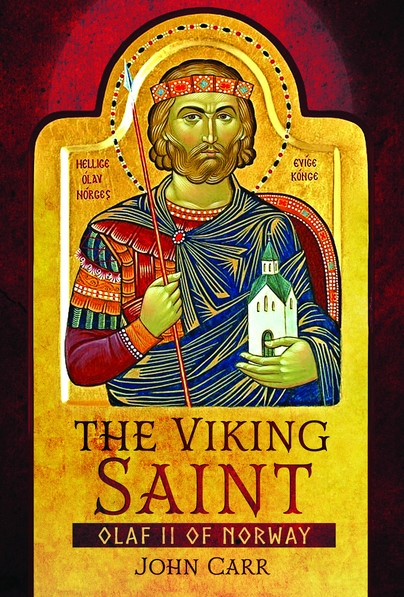 Preorder
Add to Wishlist
You'll be £16.00 closer to your next £10.00 credit when you purchase The Viking Saint. What's this?
+£4.50 UK Delivery or free UK delivery if order is over £35
(click here for international delivery rates)

The Vikings and sainthood are not concepts normally found side by side. But Norway’s King Olaf II Haraldsson (c. 995-1030) embodied both to an extraordinary degree. As a battle-eager teenager he almost single-handedly pulled down London Bridge (as in the nursery rhyme) and took part in many other Viking raids . Olaf lacked none of the traditional Viking qualities of toughness and audacity, yet his routine baptism grew into a burning missionary faith that was all the more remarkable for being combined with his typically Viking determination and energy – and sometimes ruthlessness as well. His overriding mission was to Christianize Norway and extirpate heathenism. His unstinting efforts, often at great peril to his life, earned him the Norwegian throne in 1015, when he had barely reached his twenties. For the next fifteen years he laboured against immense odds to subdue the rebellious heathen nobles of Norway while fending off Swedish hostility. Both finally combined against Olaf in 1030, when he fell bravely in battle not far from Trondheim, still only in his mid-thirties. After his body was found to possess healing powers, and reports of them spread from Scandinavia to Spain and Byzantium, Olaf II was canonized a saint 134 years later. He remains Norway’s patron saint as well as a legendary warrior. Yet more remarkably, he remains a saint not only of the Protestant church but also of the Roman Catholic and Greek Orthodox Churches – perhaps the only European fighting saint to achieve such acceptance.