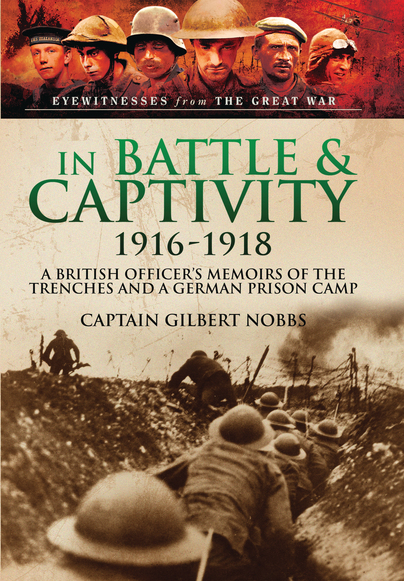 Initially published in 1917 under the title On the Right of the British Line, this is the first book written by the extraordinary Captain Gilbert Nobbs. Dedicated to his ever loving wife, the harrowing memories and experiences of Nobbs at the Battle of the Somme and after are captured here in a rare account of what proved to be one of the most ultimately futile battles and the agonising aftermath.

Following his journey from the fields of the Somme into German custody, In Battle & Captivity 1916-1918 provides an unflinching report of the dramatic losses felt during the horrific Battle of the Somme. However, the book manages to maintain a message of hope that, despite experiencing the barbarity of German captivity, there can still be happiness, as Nobbs proclaimed, 'I do not deplore the loss of my sight, for I can say in all sincerity that I was never happier in my life than I am today.'

During the Somme Offensive he led his company in an assault on the German trenches and sustained a shot to the head, which left him permanently blind when the bullet exited through his right eye. Grievously wounded, Nobbs lay undiscovered in a shell-hole as the battle raged round him. After two days he was found and awoke to find himself in a German hospital. Once his wounds had been treated Nobbs was sent to a POW camp where he remained for three months.

Fortunately, one month later the truth was discovered, and in December 1916, Nobbs returned to England, where his home, wife and family awaited him. This is the astonishing autobiographical account of Henry Gilbert Nobbs, an extraordinary man of inexhaustible energy whose memoirs will forever provide one of life's enduring monuments to the human spirit.

Henry Gilbert Nobbs was born in London on 3 February 1880. Having enlisted with the London Rifle Brigade in 1899, he served as a Captain in the Great War. During the Somme Offensive of 1916 Nobbs was seriously wounded and was sent to a German field hospital where his wounds were treated. When he had recovered he was sent to a German POW camp before returning to England in December 1916.