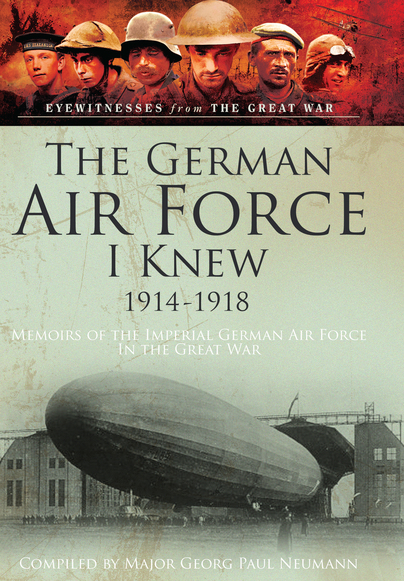 Memoirs of the Imperial German Air Force in the Great War

Click here for help on how to download our eBooks
Add to Basket
Add to Wishlist
You'll be £4.99 closer to your next £10.00 credit when you purchase The German Air Force I Knew 1914-1918. What's this?
Need a currency converter? Check XE.com for live rates

Major Georg Paul Neumann was a former German Air Force officer who had served in the Great War. He produced his outstanding survey of the German Air Force in 1920 while the events were still recent history. He was able to draw on his own experience and his contacts to compile a large number of personal accounts from officers and men who had so recently fought in the cause. The result is an accurate, faithful and comprehensive review of the aircraft, personnel and organisation of the force which began life in 1910 as the Imperial German Army Air Service and ended the war as the Luftstreitkräfte.

This comprehensive and compelling review includes a series of primary sources dealing with some of the unusual and lesser known aspects of the Luftstreitkräfte including a gripping account of defending a Zeppelin against attack by British fighters.

Major Neumann's indispensable work has never been surpassed and this English language translation is essential reading for anyone with an interest in the realities of the war in the air in the Great War.

This text adds much useful information to the study of early German military air ops.
Recommended.

Major Georg Paul Neumann was a former German Air Force officer who had served in the Great War.