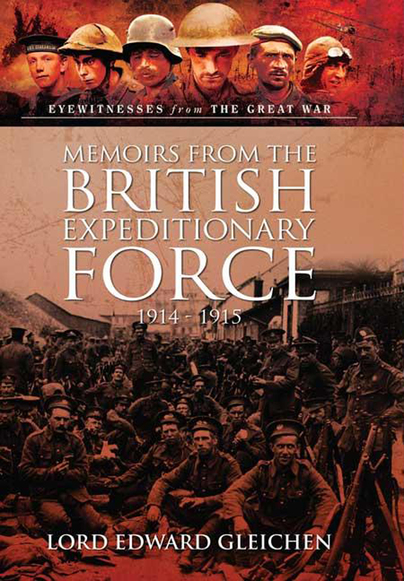 Click here for help on how to download our eBooks
Add to Basket
Add to Wishlist
You'll be £4.99 closer to your next £10.00 credit when you purchase Memoirs from the British Expeditionary Force 1914-1915. What's this?
Need a currency converter? Check XE.com for live rates

Edward Gleichen commanded the 15th Infantry Brigade during the tumultous opening battles of the Great War. The division was mobilised by 10 August 1914, and fought in the opening battles at Mons, Le Cateau and the Marne. The 15th Infantry Brigade was a regular formation tht comprised four battalions from Bedfordshire, Norfolk, Dorset and Cheshire.

Detailed accounts by battlefield commanders from 1914 are surprisingly rare. This long out of print account of the actions of the British Expeditionary Force, which was first published in 1917, was based on a diary of events written at the time by Brigadier General Edward Gleichen. It originally appeared under the title The Doings of the Fifteenth Infantry Brigade - August 1914 to March 1915.

This volume is much more than a brigade diary, providing the reader with a detailed and privileged insight into the problems of command during the confused actions in Flanders and France from the perspective of the men who
helped to forge the legend of the Old Comtemptables.

Major-General Lord Edward Gleichen was a British courtier and soldier. He was the only son of Prince Victor of Hohenlohe-Langenburg, a half-nephew of Queen Victoria. He joined the Grenadier Guards in 1881 and gradually rose through the ranks, eventually becoming a Major General.