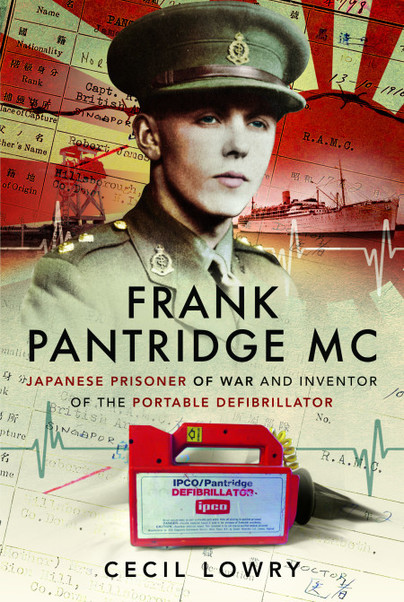 Click here for help on how to download our eBooks
Add to Basket
Add to Wishlist
You'll be £4.99 closer to your next £10.00 credit when you purchase Frank Pantridge MC. What's this?
Need a currency converter? Check XE.com for live rates


"This book is a good read, nicely illustrated, and a reminder of how much is owed this remarkable man."

While reading this book, one thing became very clear - Frank was not afraid to speak his mind. This got him into trouble on many occasions, when he used the words “with all due respect” this was not what he meant at all. This book presents his story as a person rather than a great man which makes it all the better for that approach.

Article: ‘At The Heart Of Action’ - words by Ivan Little

This is a thoroughly brilliant story about a man who lets admit could have given up after what he endured because of the Japanese, but no, he survived that and when returning home he fought back to come up with an invention that has gone on to help millions survive something that could have killed them. I enjoyed reading this book and Frank really does seem to have been a decent bloke and in a way his story echoes what happens to many men in that although they have to suffer great hardship and treatment, they come through that and then go on to create or do even better things that can have a great impact on our lives. This is a pleasant a revealing read, very clear and concise from the author Cecil Lowry. Towards the end of the book there is a nice little section where his university compliments Frank Pantridge, his friends say what they felt about him and then even some people which survived due to his invention. I thought this was a nice touch to book and really endeared you to the man. A certain 5 star book.

I was privileged to work, at one time in my career, in the civil service, with a man who had been a part of the harrowing and degrading episode in WW2 that saw the building of the Burma railway. He would never talk about his experiences, and was to some extent a figure of fun where I worked; but I befriended him and respected him, and was greeted every day with a cheery wave. They had all but destroyed him, and he worked as a labourer at the Water Research Centre in Stevenage. I daresay people like Frank Partridge would have understood his reticence to reminisce. Cecil Lowry's book describes a man who, like my labourer friend, survived against all the odds, only Partridge was a man whose brain and mind also survived. A fascinating and moving story.