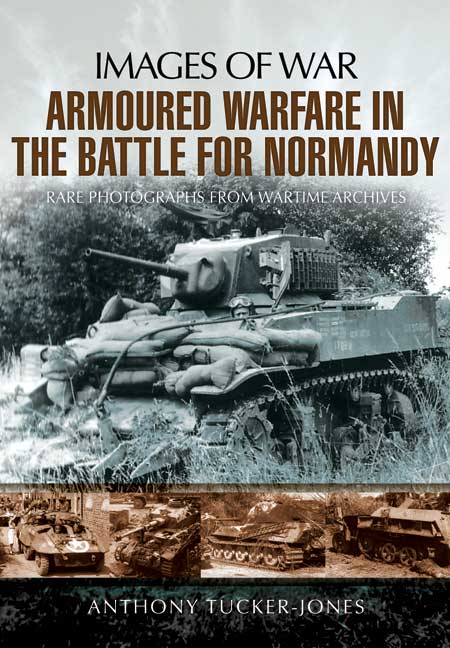 Armoured Warfare in the Battle for Normandy (ePub)

Click here for help on how to download our eBooks
Add to Basket
Add to Wishlist
You'll be £4.99 closer to your next £10.00 credit when you purchase Armoured Warfare in the Battle for Normandy. What's this?
Need a currency converter? Check XE.com for live rates

The remarkable photographs collected together for this book show in graphic detail the role armour played in the Allied struggle to exploit the D-Day landings and liberate occupied France – and the skill and tenacity of the German panzer units that confronted them. The struggle gave rise to a sequence of battles that were among the most intense, and critical, of any fought in the Second World War.

Anthony Tucker-Jones traces the entire course of the armoured campaign through the photographs – the D-Day landings, the first clashes of the opposing tanks and anti-tank guns, then the Allied operations – Epsom, Charnwood, Goodwood, Cobra - that culminated in the Allied breakthrough and the destruction of the German 5th Panzer Army at Falaise.

The images offer a fascinating inside view of the fighting itself – and of the widespread destruction and horrific casualties that went with it. But they also record the routines of tank warfare, and give a vivid impression of the experience of the tank crews of the day and of the tanks they operated – the German Mk IVs, Panthers, Tigers and self-propelled guns, and the Allied Shermans, Churchills and specialized tanks – Hobart’s Funnies – that confronted each other in the French countryside and towns.

As with all titles in the Images of War series, this book presents a wide variety of rare photographs accompanied by detailed captions, describing the course of the Normandy campaign from the build-up of the invasion forces through to the Falaise Gap and the advance on Rouen. It begins with the German armour which would meet the Allies, including the famous Tiger and Panther tanks, but also the less glamorous range of self-propelled guns, captured French armour, and the wide variety of anti-tank weaponry available, including the track-mounted Goliath radio-controlled bomb. The Allied arsenal is naturally dominated by the Sherman, Cromwell and Churchill tanks but it also looks at their innumerable and diverse variants, including the DD, AVRE and flail tanks of Hobart's Funnies, and the less familiar range of self-propelled guns and reconnaissance vehicles. The chapters go on to detail the several Allied offensives which attempted to break-through the German lines, giving a vivid sense of the scale of the destruction which followed, and also look at the exploits of the 2nd French Armoured Division and their entry into Paris.