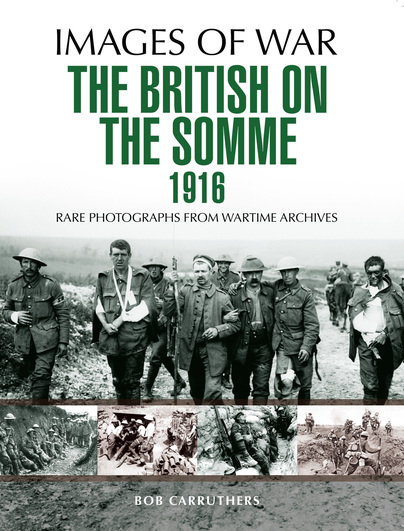 Click here for help on how to download our eBooks
Add to Basket
Add to Wishlist
You'll be £4.99 closer to your next £10.00 credit when you purchase The British on the Somme 1916. What's this?
Need a currency converter? Check XE.com for live rates

This new volume in the long-running Images of War series features the actions of the British Army on the Somme. Not only is the book comprised of rare photographs illustrating the actions of the British army fighting on the Somme, but it is accompanied by a powerful text written by Official War Correspondent Philip Gibbs, who was an eyewitness to the events. Photographs from the battlefield illustrate the terrible conditions, which the British forces on the battlefield endured in the notorious engagement, which has become synonymous with vainglorious sacrifice.

This book incorporates a wide range of images encompassing the actions of the British infantry and their supporting artillery. Also featured are images, which depict the almost incomprehensible reality of landscape, which characterized the war in the trenches. Portraits of the British troops are contrasted with German prisoners of war and the endless battle to get the supply columns through to the front.

The reproduction of the photographs is first class, their visual impact bringing the events of the Somme (one of the great senseless massacres in world history to vivid life).

Carruthers gives a brief, intelligent informative comment to each photo, placing it in its correct historical context, which is as it should.

Essential for anyone with an interest in the Great War.

Another new addition to the very popular Images of War series. This book covers the British on the Somme in 1916. The author has provided clear text to accompany the outstanding selection of images. The war artist was still very important during the Great War but photographic output was immense. Much Recommended

The book is different from many others in so far as it tells the story of the battle through photographs. This is a photograph history of the British Army on the Somme.  It is an important addition to the monolith of publications compiled on this engagement of July-November 1916; the darkest day in the history of the British Army. The photographs show every aspect of life on the Somme, from the assault on 1st July to the hard fought victories which were eventually achieved in the winter of 1916.  In all, over 600,000 Allied soldiers died in the battle...

If you want a book which incorporates all of the most striking photographs from the Battle of the Somme, this book is a necessity.

Having visited the Somme last summer, at the time of the 100th anniversary, I did find this an excellent record of what took place there all that time ago. It is so different from what we see there today it is quite amazing how the area has been able to recover so well...

I think this is an excellent collection of pictures which illustrate this famous battle, and they are all provided with informative captions. Another good addition to the Images of War series from author Bob Carruthers.

This book is a collection of photographs taken by the first official photographer Ernest Brooks and a colleague John Warwick Brooke who painfully and meticulously document the Somme offensives from July 1916.
As a primary record, they are important historical documents and capture various aspects of the battle that was fought over many months. Sadly, many are staged and are a little towards propaganda but the facts cannot be airbrushed out. At times emotions are clearer, the landscape is blighted by shells and heavy bombardment and death and destruction are everywhere.
Most have tight evidence of where and who are depicted and therefore they portray original aspects of weapons, uniforms and insignia. It is shown for instance that German prisoners at the start of the struggle seldom wore helmets and allied soldiers were apt to don a capture German cap or helmet.
I also like the shots of the wounded with their labels detailing treatment received, it is also horrific to see the pathetic hoods that served as gas masks that might save a man's life under attack.
For a military historian or enthusiast this will be a mine of information, for those wishing to learn more of this battle it will provide some further insight and for everyone who spends time looking through these images of war there will be upset and emotional empathy.
What strikes me above all else is that these men from across the 'old' dominions had no choice, not only were the men captured on camera but they were stuck in situ. Their future beyond this image was to follow orders, go up to the front, go over the top and face their fate. The battleground shows great destruction and little cover across the chalk, clay and mud of no-man's land. I cannot imagine how they faced up to the reality of war which these photos give a glimpse of dimly. I see faith as they knell before a priest, and gallantry as they rescue injured comrades but there must also have been a realism that death was a moment away.
Strong stuff that gets you thinking and leaves one chilled.