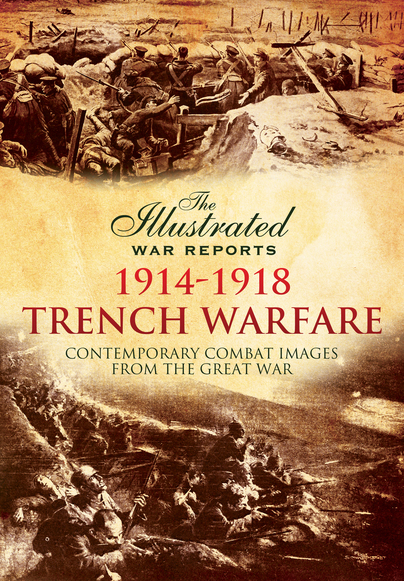 Click here for help on how to download our eBooks
Add to Basket
Add to Wishlist
You'll be £4.99 closer to your next £10.00 credit when you purchase Trench Warfare. What's this?
Need a currency converter? Check XE.com for live rates

This powerful collection, depicting the grim events of trench warfare, showcases the work of the contemporary combat artists and illustrators from the Great War era. Included here are the works of serious artists, propagandists, illustrators and humourists. The result is a stunning and vivid graphic record of life and death in the trenches during the Great War, as reported to contemporary audiences at a time when the events of the Great War were still unfolding.

All in all, this is an interesting book that shines a light on the limitations of picture-reportage from the period and whets the appetite for anyone interested in the art of the period. There is enough variation in the images to keep the reader's interest and it does well to cover the entire war; choosing the images must have been quite a task! Repeatedly one is struck by the skill exhibited by the truly remarkable artists in conveying their subject matter.

However, the real value of this book is where it plays to the strengths of the artist over the photographer. It would have been impossible to have captured the images shown on film and therefore, this view of the war through the eyes and imagination of the artist, gives a truly different perspective. A perspective where emotion and visceral combat collides with mud and daily life in the trenches, as seen through the eyes of an army of talented and patriotic artists.

A collection of contemporary images from the war which provides a graphic artist's impression of the living hell endured by those who served at a time when photography showed little of the true horrors and it was left to the artists of various magazines and newspapers to provide for the general public a sense of the battlefield.

A splendid selection of war artist illustrations with vivid text. This is a fascinating book that brings out the carnage of WWI as the opposing armies engaged in a terrible war of attrition.
Highly Recommended

The First World War was a watershed in so many aspects of technology, including not only the technology of war, but how the war was recorded. The photographic equipment which was used during the Great War was heavy and cumbersome and so the ability to take quick shots of was going on was limited. Also, photographs were subjected to strict censorship with the increasing realisation that maintaining moral on the home front was crucial to the war effort. The result was that action shots from the front were rare, and magazines had to recruit the serves of artists and illustrators to show images of key battles and engagements. Their work usually found a place in popular magazines such as The War Illustrated.

The results of their work continues to have a huge impact today. Bob Carruthers has done a magnificent job in pulling some of the most striking images together in this book. The book opens with the painting 'The Second Battle of Ypres by William Barnes Wollen, a piece of work almost draws you in to the desperate defensive battle in perhaps away that even a photograph could not.(p5) The opening part of the book provides the reader with an excellent synopsis of the art from WW1, thus ensuring that this book is as useful to the art historian as the military historian. The author states that the War Artist were able to present a 'vivid picture' of the world as it really was, in full colour, just like our own world and today, through their work we are privileged to have access to a remarkable record of the Great War which brings back the dimension of colour to an otherwise grey world.

Key paintings shown in the book include 'The Kensingtons a Laventie' by Eric Kennington, 'Over the Top' by Paul Nash, and the outstanding 'Gassed' by John Singer Sargeant. p12

With the centenary of the Great War, this book, as the author states, provides a vital reappraisal not only of Official War Artists, but also of the neglected contemporary output of combat illustrators of the Great War. The artists were able to work with the writers who had witnessed events and often fighting men themselves ensuring that a visual account could be provided not available by many other means.

Informatively introduced to explain the use of war artist to record scenes from WWI this is a surprising book and a missing link in the recorded history of these battles and exchanges.
Pen & Sword books are very adept at pushing publication boundaries and this book like so many they produce deserves a much larger audience.
Crammed with often first hand drawings and illustrations this book tells a story in detail that is seldom see beyond familiar photos or video clip. Therefore, it is an eye-opening experience as these scenes are as real as if captured by a camera. Following the time frame of the war they show they range of combatants from throughout the commonwealth fighting Germans, Italians and Turks. Many are used to illustrate a remarkable act of heroism or those who receive medals for their bravery. most show unknown soldiers attacking, defending, building trenches, rescuing comrades or lying mortally wounded in no mans' land or across barbed wire. The illustrations are in such detail you could spend hours poring over them, from wounded horses to early tank deployments.
Bob Carruthers writes: " A war artist essentially creates a visual account of war by showing its impact as men and women are shown waiting, fighting, working, suffering and celebrating. The works produced by war artists are immensely varied and they form an all too often overlooked record of many aspects of war. "
I am grateful for the opportunity to read this book and reflect through other peoples' creativity some of the most destructive days in human history. While I still can't imagine what, it was like I know I am grateful I have lived in relative peace and remain forever grateful.