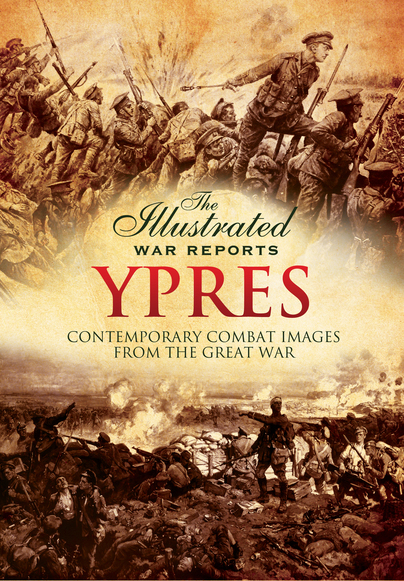 Click here for help on how to download our eBooks
Add to Basket
Add to Wishlist
You'll be £4.99 closer to your next £10.00 credit when you purchase Ypres. What's this?
Need a currency converter? Check XE.com for live rates

This powerful collection, depicting the grim realities of the four-year struggle for the Ypres salient, showcases the work of the contemporary combat artists and illustrators from the Great War era. Included here are the works of serious artists, propagandists, illustrators and humourists. The result is a stunning and vivid graphic record of life and death in the most infamous campaign of the Great War, as reported to contemporary audiences at a time when the events of the Great War were still unfolding.

During the Great War artists and illustrators produced a highly accurate visual record of the fleeting moments the bulky cameras couldn't reproduce. These works form a body of war reportage that are as valid as the written word. Today, the work of the combat illustrators and the official war artists from the Great War era is overlooked by historians in favour of photographs, but these illustrations are nonetheless important, as they provide a contemporary record of hand-to-hand fighting, trench raids, aerial dogfights, sea battles, desperate last stands, night actions and cavalry charges

A magnificent collection of illustrations commemorating the Ypres conflict. As we get further and further into the 100-year anniversary of this horrific war, so the publishers, in particular Pen and Sword, seem to be discovering and publishing photographs, facsimile reproductions of newspapers, drawings etc., that illustrate what happened to our ancestors and the people they were fighting. Pen and Sword already publish the very finest pictorial history of the first world war, with the 1914 and 1915 volumes already available. This new series of Illustrated War Reports is a worthy adjunct to that series.