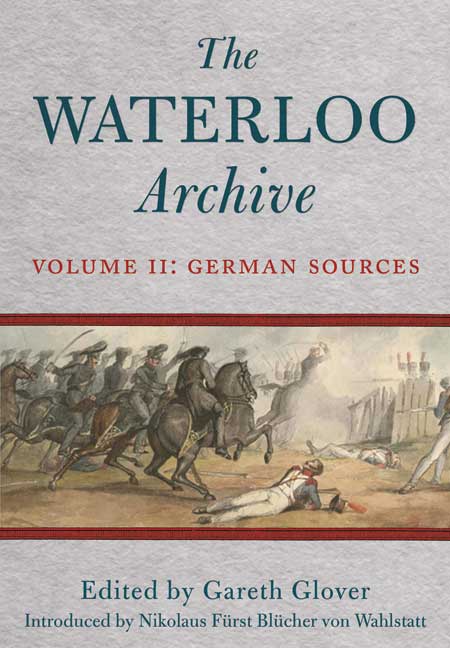 Click here for help on how to download our eBooks
Add to Basket
Add to Wishlist
You'll be £4.99 closer to your next £10.00 credit when you purchase The Waterloo Archive: Volume II. What's this?
Need a currency converter? Check XE.com for live rates

German troops formed the majority of Wellington's forces present at the Battle of Waterloo including those of Nassau, Brunswick, Hanover and the King's German Legion, and they have left a large number of first-hand accounts of their role in the battle.

The actions of the King's German Legion – an integral part of the British Army and partly officered by British soldiers – has been published in English, but to a limited degree: Herbert Siborne published letters written to his father; Ompteda and Wheatley have had their memoirs published; and History of the King's German Legion included a small number of letters, including the oft-misquoted account of the defence of La Haye Sainte by Major Baring. This forms a tiny proportion of the German material available. Therefore it is not surprising that early British histories of the battle have largely sidelined the achievements of the German troops, and this has been regurgitated by most that have followed.

This situation did not change until the 1990s when Peter Hofschroer published his two-volume version of the campaign from the German perspective, which included snippets of German documents published in English for the first time. But even this proved not totally satisfactory, as it did not provide the whole document to allow full interpretation.

There is a great need to provide an English version of much of the original German source material to redress the imbalance; this volume is intended to remedy that situation by publishing sixty of these reports and letters fully translated into English for the first time, giving a clearer insight into the significant role these troops played.

Gareth Glover is a historian specialising in the Waterloo campaign and the Peninsular War. He left school at eighteen to join the Royal Navy as a Seaman Officer and completed his extensive training course at Dartmouth College. He has published articles in The Waterloo Journal and the Journal of the Royal Artillery, and a novel about Waterloo, Voices of Thunder.
'Christmas Selection 2010, Napoleon.org website'

Full of amazing, vivid first-hand accounts which give insights into the many personal battles which made up Waterloo. ... We cannot recommend too highly.

The Waterloo Archive is going to be one of the most valuable sources of information available on the campaign of 1815, as Gareth Glover brings into the public domain much of the hitherto unpublished archival material written by the various nationalities who took part in Volume I brought us material from the British Participants: this second volume presents a wealth of material from the German perspective of the campaign - Hanoverian Kings German Legion, Brunswick and Nassau, that provides an important non-British version of events.

A great addition to our Napoleonic knowledge.

For too long we've been only offered British accounts of the great battle of Waterloo and, as history lovers, we have missed out on some telling experiences of German troops there.
They were a large part of the Allied army and served in forces including those of Hanover, Brunswick, Nassau and, of course, the King's German Legion.
Some of those men were unfairly accused of not doing as well as British troops, but in The Waterloo Archive: German Sources we get to see the contribution made by the German-speaking troops.
Journals and diary notes from soldiers in dozens of regiments make up the The Waterloo Archive: German Sources and its wide-reaching view is one of its great strengths.
In addition, many of the sources have never been published in English before and so offer readers a rich new look at warfare in the Napoleonic era.
There were details from Major von Dreves, of the Osnabruck Landwehr, who described Colonel Hugh Halkett capturing General Cambronne of the French Imperial Guard.
It was during the retreat from Waterloo and the general had been organising a rearguard when the colonel forced his way through French skirmishers to grab the enemy officer and haul him, fighting, back to his lines.
"A French general (whose name I believe was Cambronne) was energetically engaged in attempting to halt and reform the battalions.
"He succeeded several times; but their retiring continued however, as they were forcefully driven back by our pursuing battalions.
"Our brigadier, the then Col Halkett, had observed that action and, with unequalled intrepidity, rode through the French skirmishers, who covered the retreating columns, to that general and, with great luck, brought him back before the entire line, through the enemy skirmishers, and made him his pirsoner, notwithstanding (the man's) forceful resistance."
Rifleman Friedrich Lindau's narrative is amazing. He was serving with Colonel Ompteda's KGL brigade and was helping to defend La Haye Sainte during Waterloo.
During the massive rainstorm that struck the night before the fighting Lindau was ordered not into the dry of the buildings but to camp in the orchard.
"Which did not please me at all because I could not find a single dry spot."
Lindau tells of the fierce firefight between the French and his comrades, how the attackers grabbed at their rifles through the loopholes and the desperate shortage of ammunition.
Eventually they had to surrender and were robbed by the French and some wounded were killed.
Some time later they escaped while their captors plundered a barn and soon came across Prussian uhlans who took them to a nearby village where they recovered from their exertions.
Lindau had a good friend called Harz who had been unable to sleep on the night before Waterloo because he had dreamed he had died, shot through the body.
Lindau told him not to mind such stuff but during the battle Harz was killed, shot through the body.
One amusing part of his tale is that he mentions a woman from Hamelin whose surname was Pieper.
The cavalry and artillery are also covered in The Waterloo Archive: German Sources.
I read with interest General William Dornberg's description of dealing with a regiment of cuirassier that had been advancing at the trot between Allied artillery and infantry squares.
Only having light cavalry at hand, Dornberg ordered two regiments to stay in column and hit the French heavies on each flank as they came on. The plan worked a treat and the cuirassiers were seen off.
On a subsequent attack by the armour-clad French, Dornberg was run through the lung with a sword.
"As blood was coming out of my mouth and my speaking was much impaired, I had to ride off to the rear."
So matter of fact and without the histrionics we would get nowadays.
The Waterloo Archive: German Sources offers many such instances that bring alive the battle of Waterloo and the very important part that Wellington's German allies played in winning the fight.
Included in sections on the various regiments are details of officers killed and wounded and the number of casualties the units suffered.
A great addition to our Napoleonic knowledge.
8.5/10

To translate the material for Volume II of The Waterloo Archive, editor Gareth Glover, a former navy officer and foremost authority on British archive material, began a correspondence with Martin Mittelacher, an American resident of German extraction and an expert on the Waterloo campaign. From the reports and letters of German soldiers that make up this volume, we learn things that change the common view on some well known pages of the battle. We learn, for example, that troops of the 1st Battalion of the 2nd Nassau Regiment were initially the only defenders of the buildings at Hougoumont and that they did not retire, but remained throughout the battle, repelling a second French breakthrough into the farm complex - something that has been missed by many previous historians who exaggerated only the courage of the British Guards.
The light that The Waterloo Archive, Volume II sheds on...examples of long-overlooked material should prove of special interest to for all the historians and laymen with an interest in the seminal battle in particular and the Napoleonic Wars in general.

Volume II is a goldmine of new material for researchers on Waterloo. It goes a long way to dispel misconceptions and myths of the role of the German contingents in the Waterloo Campaign. Particularly of interest is the information on the role the Nassau troops played in the defense of Hougoumont, which few British primary sources mention.
The authors of the reports often wrote with a refreshing honesty that is missing in the British memoirs. They were willing to praise other units or officers that did well. Yet unlike most British accounts, they were not afraid to provide names when someone was incompetent or was a coward.
As usual, Mr. Glover does his normal superb job editing the letters. He has provided 28 pages of footnotes (an amazing 455 footnotes!) that give additional information on individuals and places mentioned in the text. This is extremely helpful, since many of the entries refer to junior officers and non-commissioned officers that most readers will not be familiar with.
.. this book will be a valuable addition to any Waterloo collection!

The Waterloo Archive Volume II should prove of special interest to all the historians and laymen with an interest in the seminal battle in particular and the Napoleonic Wars in general.

A good collection of reminiscences, especially on the accounts of the Artillery on occasion running out of ammunition and having to retire to replenish from the ammunition wagons that were placed to the rear, which might go some way to explain why Wellington thought that some of the artillery was fleeing the field... there is also scathing accounts of battalion musicians and doctors running away. All in all, well worth the money.