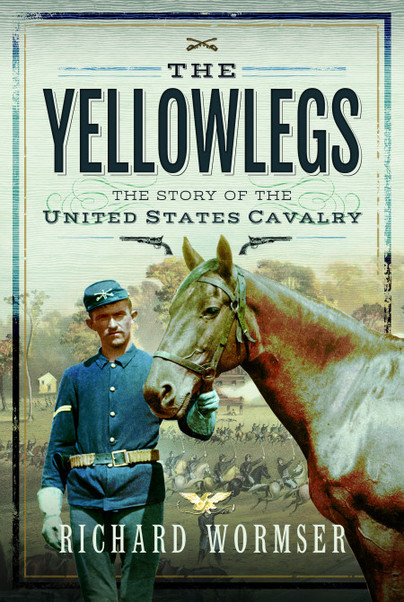 The Story of the United States Cavalry

Click here for help on how to download our eBooks
Add to Basket
Add to Wishlist
You'll be £4.99 closer to your next £10.00 credit when you purchase The Yellowlegs. What's this?
Need a currency converter? Check XE.com for live rates

The story of America’s cavalry is extraordinarily rich in colourful, and often flamboyant, personalities and exciting action. Indeed, much of the early military history of the United States is dominated by the exploits of its horse-soldiers.

In this comprehensive and lively account, the author – who was himself an enthusiastic horseman – narrates the major events and characters of the US Cavalry’s formative, and, some might say fruitful, years. From the American Revolution and the exploits of men such as Henry ‘Light-Horse Harry’ Lee III and Francis Marion, the first of the guerrillas, the author follows on with Stephen Kearny, the ‘Father of the Cavalry’ whose Dragoons went West to California on mules, and his nephew Philip, who organized the famed Gray Horse Troop of the Mexican War.

Other famous names that feature in this narrative are those of Jonathan ‘Stonewall’ Jackson, George Crook, who admired the Indians it was his duty to hunt down, and George Armstrong Custer. A United States Army officer and cavalry commander who served with distinction in the American Civil War, Custer is most commonly remembered for leading more than 200 of his men to their deaths in the Battle of the Little Bighorn in June 1876. Also known as ‘Custer’s Last Stand’, Bighorn was part of the Black Hills War against a confederation of Plains Indians, including the Cheyenne and Dakota Sioux. It remains one of the most controversial battles in American history.

Roosevelt’s Roughriders and Black Jack Pershing, who led his troops in an automobile, complete the narrative – one which is undoubtedly a saga of daring raids, of epic marches, and of gruelling battles. As the author reveals, the story of the US Cavalry is also the story of the birth and growth of America itself.

If you read one action-packed study this year, make it this one!

The Yellowlegs is an excellent history of the United States cavalry. They were called
the Yellowlegs because they had a yellow stripe down the outer seam of their trousers,
and they were made famous by men like General Custer and the iconic film actor John
Wayne. They feature in numerous Western films and their modern-day reputation is
based on these epic movies.

This book is an outstanding history of them from their inception in the American
Revolutionary War right to their usage by General Pershing. It details the key figures
and how they helped the development of this branch of service. It described the
difficulties they faced and how the Government viewed the horse soldiers.

I found this book exceptionally interesting and well worth reading. It is a lovely history
and very informative. If you are seeking a history of these brave soldiers, then this book
is the one to have on this subject and the author deserves congratulating on creating this
masterpiece.

As featured on On The Old Barbed Wire Blog

The books flows wonderfully well, gently introducing the characters who later of figure so highly Custer’s Civil War service being one such example. The development of this combat arm was unique to the Continent, both in weaponry, horse management, provisioning, and of course employment. The book does a fine job of exploring and explaining the reasoning behind the dumping of sabres for pistols, pistols for revolvers, carbines for repeaters, the seasonal nature of campaigning based on grazing and supplies.

The Yellowlegs would make a fine addition to any students of warfare's library or for the more casual reader who just wanted to discover whether Custer was the complete incompetent he’s is often painted as.

The book is a review of the history of the United States Cavalry through some of the most well-known characters... Interesting work.

This is social history at its absolute best as Richard Wormser traces the origins of the American cavalry horse. Packed with historical facts, this is a brilliant exercise in painstaking research and fascinating storytelling.

This is an excellent account of the history of the US Cavalry to the end of the 19th Century. It offers great depth of research and is most readable. It underlines that for much of the time the US Cavalry was the representation of the United States in the expansion to the West.
My only criticism is that it needed more and better maps.
Michael McCarthy. Battlefield Guide

Born in New York on 2 February 1908, RICHARD EDWARD WORMSER graduated from Princetown University to become an award-winning writer of fiction, under his own name as well as a number of pseudonyms. Early in his career, Richard was employed as an editor at, and writer for, the famous publishing house Street & Smith. In the late 1930s he moved to California to be a rancher, and in the early 1940s served as a mounted patrolman with the US Forest Service. Richard passed away in Arizona in July 1977.