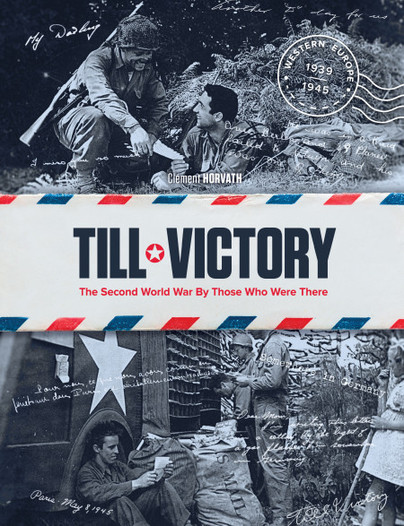 You'll be £30.00 closer to your next £10.00 credit when you purchase Till Victory. What's this?
+£4.50 UK Delivery or free UK delivery if order is over £35
(click here for international delivery rates)

A work that has earned a special place in our library.

This book is based on the previously unpublished letters and diaries of those who fought, a valuable source material. Original source material is vital to those researching military history but it is also fascinating reading – Very Highly Recommended

It's important to record the testimonies of those who went before, more so - arguably - from those who found themselves in extraordinary situations. Clement Horvath's re-telling of aspects of the Second World War by those who were there is a worthy addition to WW2 narratives and the book is lavishly produced and well-illustrated.

The author has added his portions of the content in a very human way rather than just relaying facts to the reader; the result is that I found myself looking forward to his content as much as that taken from the letters and the stories of those that survived World War 2. The result is a book that brings you close to and makes you think about what these people did and in too many cases what the cost of it was.

This is an excellent book if you enjoy personal stories and collections... This book gets a very positive 4.5 out of 5 stars from me.

A well researched and thoughtfully written book with a lot of detail of life in wartime which will not be apparent to the modern or younger reader. The way the book is structured means that it's possible to dip in and out reading one campaign or story at a time.

If you are interested in biographical stories then this book gets the full 5 mushrooms.

A special look at the personal records in diaries etc., of the men and women who served during the second world war, and how they saw things progressing as the war wound down. Absolutely fascinating testimony from the people who were actually involved.

If ever there was a love letter to the hobby of militaria collecting, this is it… With artefacts, stories, re-enactors, locations, ephemera, medals and all the other things that collectors love to collect scattered throughout history, you have a tremendous and visually fantastic look at the war through the eyes of veterans and collectors alike.