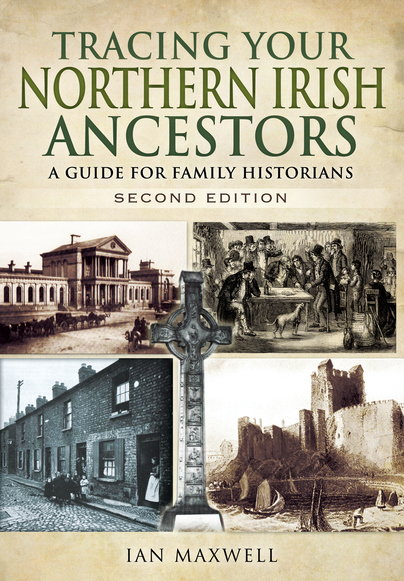 Click here for help on how to download our eBooks
Add to Basket
Add to Wishlist
You'll be £4.99 closer to your next £10.00 credit when you purchase Tracing Your Northern Irish Ancestors - Second Edition. What's this?
Need a currency converter? Check XE.com for live rates

The second edition of Tracing Your Northern Irish Ancestors is an expert introduction for the family historian to the wealth of material available to researchers in archives throughout Northern Ireland. Many records, like the early twentieth-century census returns and school registers, will be familiar to researchers, but others are often overlooked by all but the most experienced of genealogists.

An easy-to-use, informative guide to the comprehensive collections available at the Public Record Office of Northern Ireland is a key feature of Ian Maxwell’s handbook. He also takes the reader through the records held in many libraries, museums and heritage centres across the province, and he provides detailed coverage of records that are available online.

This is a well written and informative guide to tracing Northern Irish ancestors. First published in 2010 this new edition, published last year, has been authored by someone who knows his stuff/ Ian Maxwell is a former record officer at the Public Record Office of Northern Ireland and thus is well-placed to advise.

So many 'how to...' type-books can simply reduce to the level of providing lists of records with series and piece numbers alongside, and where to find these. This books is different in that it also gives a good deal of historical content and thus engages the reader early on. Readable and recommended.

Internet search engines are all very well. They are brilliant channels into all sorts of weird, wonderful and enlightening stuff, of course. But sometimes an actual reference book that you can hold in your hands is just the perfect companion.

One thing that worried me about a book like this was that it would be texty and stuffy and a bit self-important but not a bit of it. It is written well in a very accessible style that is both reassuring and immensely encouraging to both the amateur and professional historian.

It is clear to me that Ian Maxwell’s book is essential reading if anyone out there is interested in tracing their Northern Irish ancestors.

There are not many other such guides around, making this all the more welcome.
Maxwell himself is well placed to be our guide - he was formerly on the staff at the Public Record Office of Northern Ireland, and has given many courses and lectures on Northern Irish genealogy.

Maxwell also sets the historical context, exploring issues such as the Plantation of ulster and of course the partition of the 1920s.

This publication is not just a directory of sources, or a 'how to' guide, but also a very informative read.