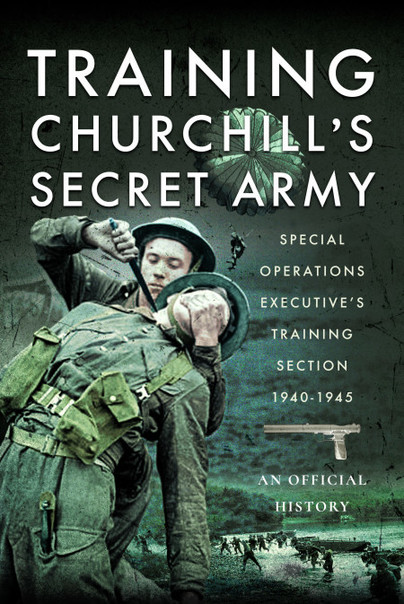 Preorder
Add to Wishlist
You'll be £16.00 closer to your next £10.00 credit when you purchase Training Churchill's Secret Army. What's this?
+£4.50 UK Delivery or free UK delivery if order is over £35
(click here for international delivery rates)

Shortly after the creation of the Special Operations Executive in July 1940, the first of its Special Training Schools was formed at Brickendonbury in Hertfordshire. The object of the school was to train men of different nationalities as instructors and recruiters who would then return to their own countries in Occupied Europe to raise groups to undertake acts of sabotage. The syllabus covered a variety of subjects ranging from political theory and propaganda to demolitions and weapon training.

The men, and later women, selected for training first undertook a preliminary period of assessment where unsuitable candidates were dropped from the programme. The next stage would be paramilitary training where they would be instructed in demolitions, weapons, minor tactics, combined operations, intelligence methods, communications and parachute training, which was originally carried out by the RAF at the Central Landing Establishment at Ringway (today’s Manchester airport). After the paramilitary stage, these ‘organisers; would move on to Finishing Schools of which there would be one for each of the different country sections. There they would learn secret service methods, propaganda, the organisation of enemy forces and the local conditions in the occupied country concerned. The organisers would be held at Finishing Schools until they were needed for operations. When returned to their country, these ‘organisers’ were charged with establishing a network of agents, a system of communication, and depots for equipment, all aimed at causing as much disruption as possible to the German security and armed forces.

This book details how and where the training schools were formed and how the training was conducted. It also explains how, as SOE expanded, more sites were required. In January 1941, five houses were acquired in the Beaulieu area in Hampshire to serve as finishing schools, with most of the paramilitary training being undertaken in the Arisaig area of Inverness-shire in Scotland.

The heroic work of SOE agents has become legendary, but their achievements in the field were only made possible because of the wide-ranging and intensive training they received before they were infiltrated into Europe. This account of the Training Section of SOE is an essential addition to the literature, and the understanding, of this once secretive, now famous organisation.