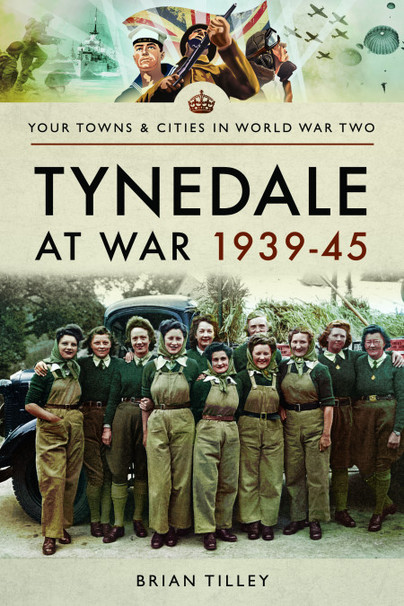 Click here for help on how to download our eBooks
Add to Basket
Add to Wishlist
You'll be £4.99 closer to your next £10.00 credit when you purchase Tynedale at War 1939–1945. What's this?
Need a currency converter? Check XE.com for live rates

Barawling Australians, Polish pilots burning to avenge themselves on Germany for the invasion of their country, the German officer who drowned while trying to escape from a South Tyne PoW camp, and the pub landlady who watered down her gin in order, she claimed, to prevent naive Land Army girls getting drunk it was all part of life in Tynedale as the district went to war for the second time in twenty-five years.

Although well away from the battlegrounds of Europe, Tynedale did not escape the ravages of the Second World War. The rolling moorlands of the heart of Northumberland are still pitted with dozens of craters, where both Allied and Axis aircraft crashed in flames, and there were tragedies on the Home Front too.

At remote Coanwood, twenty-four men were left dead or seriously injured when a training exercise went badly wrong, and an exploding ammunition train at Hexham railway station left three men dead. Even before the conflict began, founder of the British Union of Fascists Sir Oswald Mosley and the hated Nazi propaganda broadcaster, William Joyce better known as Lord Haw Haw both came to the heart of Northumberland to preach the Fascist gospel in Hexham.

This book deals with the everyday impact of six years of war on the district, from the arrival of gravely wounded soldiers from Dunkirk at Hexham Emergency Hospital, through to dealing with thousands of often louse-ridden evacuees from industrial Tyneside, the heroics of local servicemen and the antics of the Home Guard.

The area covers Hexham which was blessed with an excellent newspaper the Hexham Courant which has been used as a basis for recording the history of wartime Northumberland, civilian and military activities are covered, evacuees, Women's Land Army, ARP, air raids, crashes, ship wrecks, Home Guard, experiences of individuals, prisoners of war and there are portraits and biographies of some of the service casualties, lots of illustrations and a lucid and informative text. Watch out for the volume covering your area, you will not be disappointed.

' [This book is] a heady mix of triumphs and tragedies, heroism and horror and the day to day efforts of the Tynedale populace to cope with the demands of the conflict.'

I have never been further north than Manchester, I'm sad to say, and now, at 71, probably never will. That doesn't mean that I don't find books like this fascinating - I do. There are so many tales crammed into this brilliant volume, about the citizens of Tynedale, that it's something of a roller coaster ride through Tynedale's second world war years. Hugely entertaining, authoritative and fascinating!