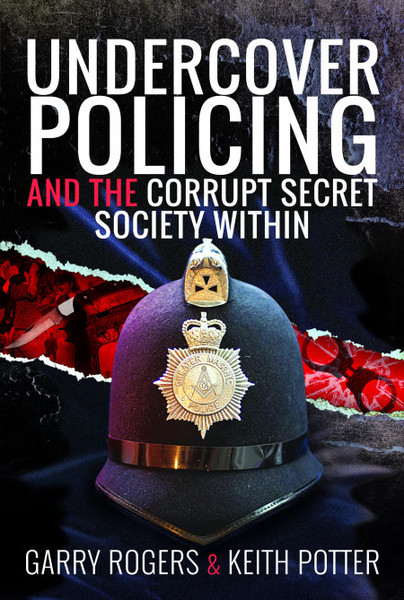 Undercover Policing and the Corrupt Secret Society Within (ePub)

You'll be £4.99 closer to your next £10.00 credit when you purchase Undercover Policing and the Corrupt Secret Society Within. What's this?
Need a currency converter? Check XE.com for live rates

Garry Rogers played a key role in one of the UK’s most successful undercover policing operations, targeting the football hooliganism which blighted the domestic and international game. From Old Trafford to Turkey and Sweden to Sardinia, this working class lad turned undercover cop infiltrated some of the most notorious hooligan gangs at club and England level as part of Greater Manchester Police’s ground-breaking Omega Unit.

When the force extended its undercover policing operations to target serious and violent crime, it was Garry who gained the trust of armed robbers, drug dealers and a murderer securing the evidence to take them off the streets, often for many years.

But after five years at the cutting edge of covert operations, and with a new, inexperienced and ultimately corrupt officer in charge of the unit, Garry found himself dangerously exposed to violent criminals living just minutes from his family home. And when he turned to the force for support he was met with a wall of silence, accusations, and what one chief constable later described as a Masonic conspiracy that eventually pushed him out of the job after 28 years. Now he’s determined to tell his story – the truth, the whole truth and nothing but the truth.

Garry Rogers played a key role in one of the UK’s most successful undercover policing operations targeting football hooligans, in the national and international game. When the force extended its undercover operations to target violent crime it was Garry that gained the trust of these armed robbers. But after five years at the cutting edge of policing, Garry found himself exposed to the violent criminals closer to home. When Garry turned to the force for support he was badly let down and face a wall of silence. Garry was eventually pushed out of the force after 28 years of loyal service, and now Garry wants to tell the truth of what happened.

Wow, what a fascinating book to read, and in many ways shocking in that a loyal man can be left to be hung out to dry through no fault of his own, and then have the powers that be conspire against him. The discrimination and provocation faced by pretty much one man was enormous and it’s amazing how he could get through all these years of such pressures. The book is in a way very revealing about what goes on in the police forces around the country, and having read about other forces there is no surprise at the amount of corruption going on. This book was a thoroughly good read from start to finish and had me hooked all the way through, it’s a shame I finished the book so quickly in a couple of days. Although it’s difficult to have to read about such corruption it was an excellent read and I would fully recommend it to all.

Undercover (UC) policing is the most dangerous police work that can be carried out; elite units such as Authorised Firearms Officers or Flying Squad personnel will inevitably have back-up in life-threatening operations – but often, the undercover officer is on his (or her) own. They also have to contend with penny-pinching budgetary restraints and by having operations often run by totally unsuited senior officers, who possess university degrees, in lieu of experience.

The UC officers must, of necessity have to rely on their own skills, courage and ingenuity, as did the author of this book, Garry Rogers.
Rogers was a highly motivated UC officer who carried out those duties for Greater Manchester Police (GMP) with considerable skill and bravery and obtained some astonishing successes – there’s no doubt about it, this was ‘seat of your pants’ policing.

Matters might have been made easier had it not been for an inept – and, as it was later proved, corrupt - senior officer.

This book describes how Rogers went up against a tide of apathy from a wave of supine, nepotistic officers, aided & abetted by freemasonry in the senior ranks of the GMP. He was not only vindicated but was also awarded a very well deserved Queen’s Police Medal for distinguished conduct.

It came at a cost to his mental and physical health, as this expertly written and well-researched book describes. It is a tribute to UC officers everywhere – but especially, Garry Rogers – and it comes with my highest recommendation.

Well written and detailed account of many undercover operations and the transition of an officer from being a newbie and attending the training academy through to the end of his policing career. The second part included an accounting of the abuse of authority by senior officers subsequent to the narrator's work as an undercover agent.
The narrative as a whole is told chronologically and flows seamlessly from one situation to the next. Very organized and detailed sections help the reader follow and understand how this officer's career was stopped cold as the result of suspicions that were completely unsubstantiated and never proven. A conspiracy set in motion because of an anonymous letter to a paper, for which the author of said letter was never identified, but for which resulted in the ruination a career and an officer's good health based on an unproven, unsubstantiated suspicion.

I love true crime books and this one certainly did not disappoint. From the perspective of someone right in the thick of investigating some of the worst crimes imaginable, there is so much information in this book that even the most details-focused reader will come away satisfied. Football hooliganism is so shocking and alien to most of us that the insight offered through this book almost seems like fiction, except the authors put so much analysis into the text that you must keep reading.

A powerful insight to undercover police work. Then the failings of gmp and how the Mason Lodge undermined the chain of command, affecting the career and mental health of one individual. Not that one person adversely affected is acceptable. His long and arduous battle against discrimination and bias. How it affects not just the individual but their wider family members. Corrupt silence is Just as bad as the original offence. I wish Gary and his family every happiness and success in the future.

This is the story of Garry Rogers, an undercover police officer whose career was cut short by corruption within the service.
It’s a very matter of fact account but it is clear how deeply his mistreatment has cut and the toll it has taken on his mental health and marriage.
It is to Rogers’ credit that he was prepared to take on the brotherhood and fight his corner. Time and time again he had to challenge others’ accounts.
It is essentially the story of a life and how a few people who’ve got it in for you can effectively derail it.
It’s also a revelation if you believe that organisations such as the police force act morally and in the best interests of their employees!
Recommended for those who enjoy a personal account, passionately told and documented in detail.

This is a great book and a real eye-opener , not least as it exposes the perils of "Whistle blowing" ,even when what is being exposed is criminal and corrupt conduct by those tasked with upholding the law..
I'd really love to read another book by Garry,a more detailed account of the Undercover exploits he briefly tells of here.
A very well-written book by a man who wouldn't be fobbed off despite the indifference of those supposedly monitoring the Police, attempted cover-ups and slurs on his character. It's not a spoiler to say that he does eventually find out why certain people wanted him out of the way.. Another great True Crime book from Pen and Sword.

This book is an incredible insight into what took place within the fourth largest police force in the UK, Greater Manchester Police. It delves into the mysterious and murky world of ‘undercover Policing’ from the perspective of one of their most experienced, decorated undercover officers when he was at the ‘top of his game’
From covertly Policing the 1990 World Cup in Italy to armed robbery and murder in the UK, it had me on the edge of my seat and once started l found it hard to put down.
None more so than when he ended up not only looking over his shoulder from criminals on the outside but watching his back from a section of the Corrupt senior management within the force he once served with such pride.
The same management who shredded official documents, planted and altered others all to the detriment of this highly decorated officer.
Their aim ? To protect one of their own corrupt members.
It beggars belief that this could happen but having read it, for me there was only one conclusion. It did.
A must for any true crime enthusiast.

Keith Potter is a journalist and writer who has more than 20 years’ experience working in the police and home affairs sector.

Born and raised in Salford, Garry fulfilled his childhood dream of becoming a police officer, and graduated from the uniformed ranks into an elite undercover policing team. That dream turned sour when corruption and conspiracy within the force left him struggling to survive. This is his story.