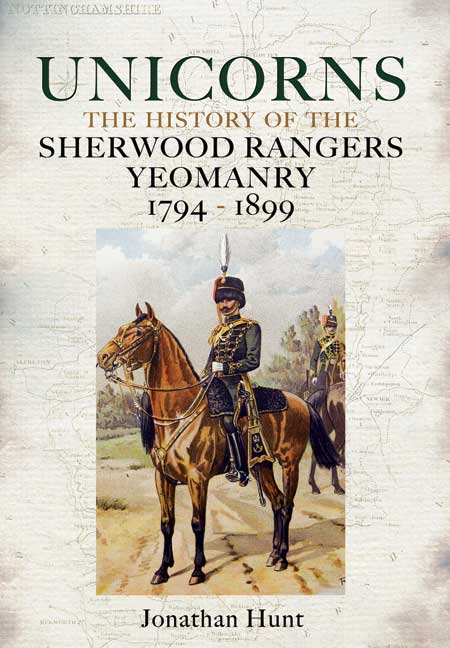 History of the Sherwood Rangers Yeomanry 1794-1899

Click here for help on how to download our eBooks
Add to Basket
Add to Wishlist
You'll be £4.99 closer to your next £10.00 credit when you purchase Unicorns. What's this?
Need a currency converter? Check XE.com for live rates

Unicorns covers the history of the Nottinghamshire based volunteer cavalry regiment, from 1794 when they were raised as part of the Nottinghamshire Yeomanry until the end of the nineteenth century. During the first 50 years they policed the county and dealt in turn: with the risk of spontaneous combustion in Nottinghamshire triggered by the French Revolution; the possibility of an invasion by Napoleon, which at times seemingly hung in the balance; the Bread Riots arising from wheat shortages due to both natural and political causes; the Industrial Revolution which triggered Luddism; Republicanism and the Brandreth Riots which led in turn to the issue of reform of the voting system and thence to the Reform Bill Riots; finally the Chartist uprisings led by a movement said to be the birth of socialism.

All these events were symptomatic of the struggle between the old order consisting of the landed estate owners, which in Nottinghamshire counted amongst their number some of the most powerful people in the land, supported by the property owning middle class, on the one hand and on the other, the new order consisting of the emerging middle and working classes in the major cities and towns.

Nowhere else did these events unfold with greater resilience on both sides than in Nottinghamshire, where the transition in power duly evolved albeit, at times far from smoothly. What makes this remarkable, and to the credit of all, was that the task of maintaining the peace was largely achieved without bloodshed on either side by well-armed troops of cavalry raised and led by the major landowners and manned exclusively from their property owning appointees, namely the very people who had the most to lose.

By 1850 the emerging police force took over the Regiment's role and it became a reserve cavalry regiment in the UK military order of battle. It was still led by the major landowners and manned by those who had their own horse, but recruited equally from the towns as the countryside. It was now resplendent as Hussars and the yeomen wore their famous green and gold described as “the colours of gorse in bloom”. They carried out their annual periods of training in Newark, Mansfield, Retford and Worksop during which they drew crowds of several thousand from far and wide to watch them and to watch their parades before the Commander in Chief, to celebrate their Centenary and watch field exercises against their neighbouring yeomanry regiments. The account therefore provides an insight into Nottinghamshire in the Victorian era. For all the glamour, the regiment took its training seriously and received good reports, but little did they realise quite how much that would be tested in the century to come.

This is a useful examination of an area of British military history that is often ignored or dealt with very quickly in other regimental histories, eager to reach the fighting, but for many people the Yeomanry was one of their main points of contact with the British army, either as members, opponents or simply as members of the public interacting with the Yeomen peacefully. The Yeomanry had a troubled image for most of this period, being painted as the instrument of oppression while it had an active role and as a faintly comic and rather obsolete force after 1851, so this detailed history of one Yeomanry regiment is a valuable redressing of the balance, looking at a military unit that was as oppressive or as comic as it was portrayed.

A lavish production of the definitive history of the Sherwood Rangers Yeomantry 1974-1899.

…reveals how the history of the regiment is inextricably linked with that of its home county of Nottinghamshire.
Jonathan chose Unicorns for the title because of a poem written about the regiment and those who served in it by the renowned war poet Keith Douglas who served in the Sherwood Rangers in the Second World War, in which he compared their courage in action to that of unicorns.