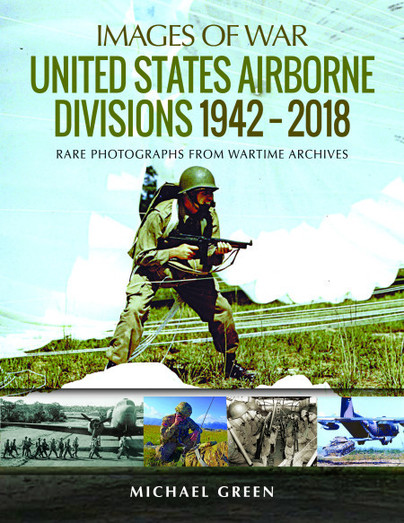 In 1942 the 82nd and 101st Airborne Divisions were formed and three more followed. 17th and 92nd (All American Division) and 101st (Screaming Eagles) fought in Sicily, D-Day, MARKET GARDEN and the Rhine Crossing (VARSITY). The 11th served in the Far East. The 13th did not see combat.

Only the 82nd survived the post-war cull. The Screaming Eagles were reactivated in 1956 and both divisions served in Vietnam with the 101st becoming a helicopter delivered ‘airmobile’ division in 1968 before being re-designated an ‘air assault’ division in 1974.

As this superbly illustrated book describes, both 82nd and 101st earned their reputations as ‘crack’ divisions at the forefront of US operations and military interventions, be it Grenada (URGENT FURY), Panama (JUST CAUSE), the Gulf Wars and most recently Afghanistan (ENDURING FREEDOM).

Thanks to the Author’s knowledge and research, this Images of War book gives the reader a full insight into the battles and the men and their equipment that have made these divisions the elite of the US Army.

First-class documentation of great interest to the historian and the modeler.

Michael Green turns out several books a year and seems able to handle a wide range of military subjects with aplomb. This time round he delves into the history of American airborne divisons from their inception in 1942 to the present day.

A stickler for detail, Mr Green provides a strong mix of contemporary images combined with pix of museum exhibits and some showing living history enthusiasts presenting airborne tableaux. This all works very well.

The author confides his attention to explaining how units were, formed, their make-up and how they worked. Although inevitable well-known episodes could hardly be avoided, the book doesn’t offer a simple rehash of well-trodden history.

The effect is to show how US airborne units adapted to the prevailing conditions of warfare over the decades. The choice of images is as well-handled as ever and the result is another solid piece of work well worth your time.

Another in the "Images of War" series, this is a good overview of the equipment and organisation of, primarily, the 82nd and 101st Airborne divisions, with some coverage of other divisions and their brief histories. It nicely blends their WW2 histories with airborne actions since then, up to their modern organisation, kit and equipment, and vehicles/aircraft including their current deployment of drones.
The main focus of the book is, of course, the usual mix of photographs that you will have come to expect if you are a regular to these publications. Archive and in theatre images are coupled with museum exhibits, reenactors and press/publicity photos. A very handy volume.

I was impressed with Images of War: United States Airborne Divisions 1942-2018 and think it would be a welcome addition to anyone interested in airborne history and photography. It's a great addition to the Images of War family of books.

A worthy addition to a very popular military history series. This book covers the history of US Airborne Divisions up to and including 2018 with the usual concise introductory text, captions and extended captions supporting a great selection of rare images – Very Highly Recommended

Another well written and presented book from Michael Green, which also holds a lot of useful references for modellers as well as historians interested in the story of US airborne forces.

The book, like all those in the "Images of War" series, shows us photos of extraordinary quality, and even if the theme of the paratroopers and the US airborne forces deserves more than one photographic book, it manages to be interesting and to inform the reader thoroughly .

A fascinating record of the US Airborne Divisions' campaigns from the middle of the second world war to the present day.

As for the Gamer/Modeller/Military enthusiast, for whom this book was conceived and executed- a lot of fun. I've already said it might be the only book a "Para-Head" needs, but I think others will enjoy it too. Just so many cool pictures that one is bound to find something to attract one's interest. A strong rec for the Parachute Infantry Fan.

An excellently illustrated book covering all the history of the US Airborne.

The story as a whole from 1942 to 2018 is a broad area to cover in the available space, but the author has done a good job of that. I have a particular interest in the Battle of the Bulge and so the section on Bastogne was particularly interesting for me, but the area cover the events of World War 2 generally was the area the drew me the most. The Cold War section did not really draw me in despite being old enough to remember the Vietnam War. The last chapter covering Iraq and Afghanistan is another segment that I enjoyed.