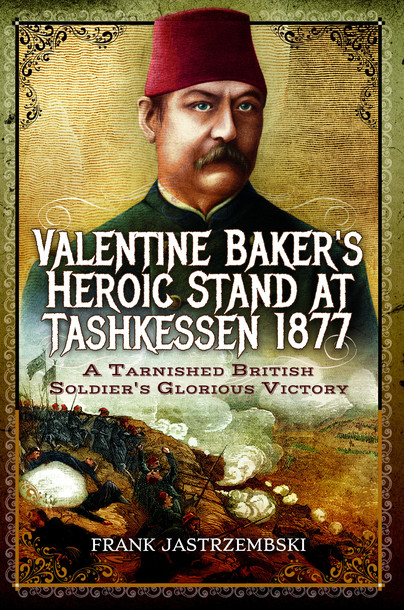 “I swear by the Prophet, that the Infidel who commands our cavalry fights with the courage of ten thousand tigers.”
– An Ottoman artilleryman observing Valentine Baker in the heat of battle during the Russo-Turkish War
“To have witnessed the battle of Tash-Kessan [Tashkessen] is one of the proudest recollections of my life, and one that I never recall without some glow of the old enthusiasm that animated us on that day recurring to me.”
– Francis Francis of The Times
You'll be £19.99 closer to your next £10.00 credit when you purchase Valentine Baker's Heroic Stand At Tashkessen 1877. What's this?
+£4.50 UK Delivery or free UK delivery if order is over £35
(click here for international delivery rates)

“There are moments in the past of many a man’s career that stand out clear and defined after the lapse of even many years: life pictures, the very memory of which brings back a glorious thrill of pride and pleasure. This is the feeling which vibrates through me still, when I recall that last and closing scene that crowned the hard-fought fight at Tashkessen.” – Valentine Baker

History has best remembered Valentine Baker for his embarrassments. In 1875, he was accused of sexual assault and dismissed from the British Army. In 1884, he suffered an embarrassing defeat at the Battle of El Teb. But what about Baker’s positive achievements?

The most underappreciated event that took place in his controversial life came during the Russo-Turkish War in 1877. The exiled Baker, in command of 3,000 Ottoman soldiers, was dispatched to the village of Tashkessen to stall 25,000 advancing Russian soldiers. Through his superb leadership and brilliant disposition of his troops, Baker was able to score a victory.

The Spartan stand of Baker and his command has gained little recognition. Despite this modern obscurity, Baker’s performance at Tashkessen was applauded by his contemporaries as a model of tactical leadership and heroism. This is the exhilarating tale of how Valentine Baker was able to find redemption at Tashkessen.

From time to time we are lucky enough to find books that aim to vindicate something or someone unjustly unknown to history. With Valentine Baker's Heroic Stand at Tashkessen 1877, its author, Frank Jastrzembski, achieves it... twice.

In sum this is a fast paced, well researched, and thought provoking book about war, tactics and a man seeking redemption. What begins as an almost Flashman like story turns into the vindication of a tarnished and forgotten soldier and opens a window on a fascinating and tragic conflict. Though unlike Harry Flashman, Val Baker had much worse luck, except at Tashkessen.

This book attempts to do three things. Firstly rehabilitate the reputation of Valentine Baker, secondly raise awareness of the Russo-Turkish war of 1877 and finally prove that the rearguard action at Tashkessen is an outstanding example of military leadership in the field. It is to the author’s credit that he succeeds across the board.

The Nineteenth Century saw a number of British naval and army officers follow disgrace with glorious service for a foreign power. This book covers Baker’s lows and highs to his triumph at Tashkessen, but it also includes some brief and fascinating views of his family – Highly Recommended.

Despite Baker’s present-day obscurity, Jastrzembski is to be congratulated for gaining the outcast officer some redemption in this 202-page, hardcover book complete with 16 pages of illustrations and maps.

It all makes for an interesting story.

I thoroughly recommend this book to anyone with an interest in nineteenth century military history in general, and the Russo-Turkish War of 1877-78 in particular. It will also appeal to wargamers and those with an interest in the men who served Victoria’s Empire both in and outside her armed forces. I look forward to reading Frank Jastrzembski’s future books with great anticipation.

This is a brilliant book, well researched and written, throwing light on a subject that deserves more attention. Not just the fascinating story of Valentine Baker, but also the role of rearguard actions in warfare. Taskkessen is indeed a model to be studied. Highly recommended.

An entertaining account of an interesting rearguard action in a largely forgotten war that has been overshadowed by subsequent conflicts and one with which I imagine most wargamers today will have little emotional involvement. Tashkessen, therefore, offers a perfect tactical situation for an unfamiliar, challenging scenario that readers of this book can inflict upon their fellow wargamers!

Author article relating to the Siege of Plevna as featured in

The book will be useful to anyone interested in the Victorian army or the Russo - Turkish Wars of the nineteenth century. It doesn't tell us anything new about Baker or his scandal but it does shed light on the period between jail and El Teb which is usually glossed over by authors.

Frank Jastrzembski's book is a well organised book. It has an index, bibliography, plenty of illustrations and maps. It even has some modern illustrations which was a nice touch.

Valentine Baker was a misfit in his time and a difficult character to understand today. However, for those who wish to get under the skin of the Victorian British, it is essential to look at him in the context of his own world. An exemplary officer in the 10th Hussars, his career was ruined by a conviction for assault on a young lady in a railway carriage for which he was dismissed from the army. In hindsight, the conviction was gravely unsound (a view shared by many of his contemporary officers including the Prince of Wales). However, in the age of new Puritanism under the aging Victoria he was forced to take service in the Turkish army where he was responsible for one of the finest rearguard actions in the Nineteenth Century against the invading Russians. For this he was lionised by the press and the British public but still snubbed by the Palace. He then moved to Egypt, again fighting for the Empire until his death. A few days after his death, the letter arrived from the Queen, reinstating him in the British army.

This book focuses on the Russo Turkish War and Baker's part therein. It is well written, lively and balanced. It gives an excellent feel for this meatgrinder of a now largely forgotten war in the Balkans, a war that nevertheless needs to be understood if a student really wishes to comprehend the causes of the Great War a generation later.

The book is well illustrated by Zsuzsi Hajdu.