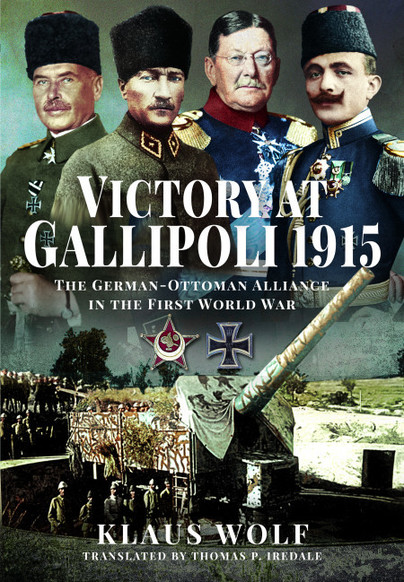 Add to Basket
Add to Wishlist
You'll be £30.00 closer to your next £10.00 credit when you purchase Victory at Gallipoli, 1915. What's this?
+£4.50 UK Delivery or free UK delivery if order is over £35
(click here for international delivery rates)

"A particularly impressive addition to the book is an alphabetized list of German officers who served with Ottoman forces between 1914 and ’16."

Klaus Wolf has produced a very worthy addition to the Gallipoli Historiography and this work should grace the bookshelves of anyone with a deep interest in the campaign.

An interesting book that helps us uncover the most important secrets of the campaign.

I want to say right from the beginning this book is a stonker, there is so much information and research that has gone into this book by the author Klaus Wolf, a huge amount of credit should go to him. I remember doing about Gallipoli at school but the teacher wasn’t that great, but now having read this book it has filled in a number of blanks and reasons. Especially as this book is written through all the research about the German side of events. Whilst this is a well written book and it is very comprehensive, it’s one of those books you need to take your time to read due to the amount of research in the book. I’ve learnt more about the men, the forces, the campaign strategy and how things were reacted to and also the politics about things especially from a German perspective. A comprehensive read, if you want info from the German viewpoint, this is the book for you. The photographs, diagrams, tables in the book are fantastic and I can really recommend this book.