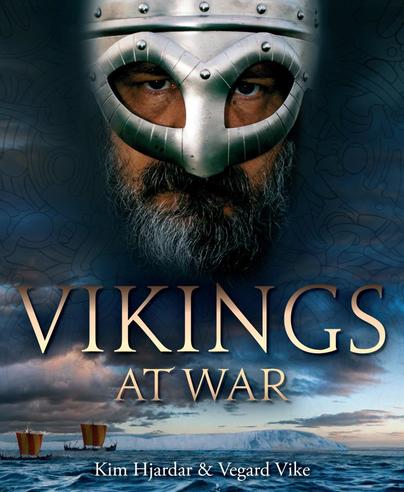 Add to Basket
Add to Wishlist
You'll be £19.99 closer to your next £10.00 credit when you purchase Vikings at War. What's this?
+£4.50 UK Delivery or free UK delivery if order is over £35
(click here for international delivery rates)

A comprehensive account of the Viking art of war, weapons and the history of their conquests, now available in paperback.

This book is a huge labour of love and one which will stay on my bookshelf for a long time as a constant reference guide..

Kim Hjardar holds a MPhil in Nordic Viking and Medieval Culture from the University of Oslo and works as a lecturer in history at St Hallvard College. He has been involved in Viking and Medieval studies for more than fifteen years, both as a professional and through living history re-enactment. He is head of Norway’s biggest and oldest Viking re-enactment association.

Vegard Vike is archaeological conservator at the Museum of Cultural History, Oslo. He has researched Viking handicraft technologies extensively. He works on a daily basis with X-rays and microscopes and the meticulous surface-cleaning of weapons from exhumed graves, which has given him a deep and thorough knowledge of the subject. He has also trained in martial arts using the different weapons of the era, as well as carrying out actual weapons production based on historical weaponsmith techniques.