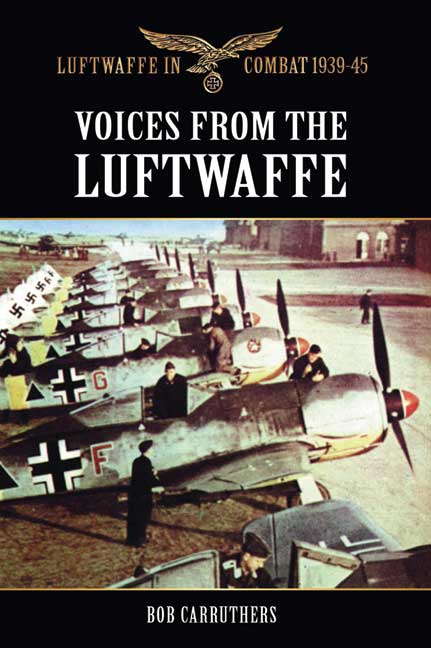 Voices from the Luftwaffe (ePub)

Click here for help on how to download our eBooks
Add to Basket
Add to Wishlist
Get Voices from the Luftwaffe (ePub) for FREE when you purchase 2 other eBooks.
Need a currency converter? Check XE.com for live rates

"It is the leaders of the country who determine the policy ...voice or no voice, the people can always be brought to the bidding of the leaders." Hermann Göring

This is the history of the Luftwaffe through the eyes of those who served in combat. The rise of the Luftwaffe from the ashes of the Great War is traced through recollections of Luftwaffe personnel who manned the gliders and perpetuated the charade that this was a civilian undertaking. The heady optimism generated by the stunning successes of the Blitzkrieg era are soon overturned by the grim experiences of the Battle of Britain and the life or death fight for the skies over Germany as the road leads ever downwards to defeat and Hitler's promised Götterdämmerung. The book is illustrated throughout with extensive selections from Der Adler, the wartime Luftwaffe propaganda magazine. This book is part of the 'Hitler's War Machine' series, a new military history range compiled and edited by Emmy Award winning author and historian Bob Carruthers. The series draws on primary sources and contemporary documents to provide a new insight into the true nature of Hitler's Wehrmacht. The series consultant is David Mcwhinnie creator of the award winning PBS series 'Battlefield'.