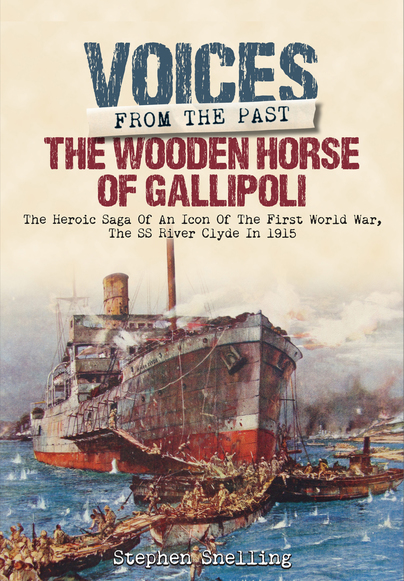 Voices from the Past: The Wooden Horse of Gallipoli (Hardback)

You'll be £25.00 closer to your next £10.00 credit when you purchase Voices from the Past: The Wooden Horse of Gallipoli. What's this?
+£4.50 UK Delivery or free UK delivery if order is over £35
(click here for international delivery rates)

The initial Allied landings on the Gallipoli Peninsula began on 25 April 1915. Many of those who went ashore at V Beach near Cape Helles did so from the SS River Clyde.

In the first full-length study devoted entirely to River Clyde and the men who sailed in her, the author reveals a remarkable tale of human endeavour told in the words of the men who were there: from the naval captain whose brainchild it was, to the teenage midshipmen who risked their lives to rescue the operation from disaster; from the infantrymen who braved a storm of fire to the staff officers who led the assault that finally secured the beachhead; from the armoured car machine-gunners whose covering fire saved hundreds of men marooned on the shore, to the navy’s own infantrymen who ventured out into the bullet-swept waters to succour the wounded.

The Wooden Horse of Gallipoli tells the story of how this collier became an icon of the First World War, its stranded bulk synonymous with one of the most extraordinary exploits of a campaign doomed to failure.

This remarkable study of the steamer and the men who sailed with her and fought from the stranded hulk will leave readers with some of the positives of this disastrous Gallipoli campaign.

Stephen Snelling has a nose for the fascinating and odd detail, a sound journalist's eye, an ability to pace his story and follow its twists and turns logically driving the narrative, and hence the reader, forward.
The Wooden Horse of Gallipoli is a good history well written and deserving of success.

This is the amazing tale of SS River Clyde.

Overall, the book content brings in the key aspects of the attack including detail on the interior of the ship, the departure, and the loss of life when men were trying to get off the boat. Striking images of this are well integrated into the book to the extent that they draw you in to the events. It is supported by excellent Appendix such as Victoria Cross citations, letter by Commander Henry Montagu Doughty and the positions on the beach. It also contains wonderful photographs of those referenced within the book, as well as striking colour photographs showing key locations today, such as the inspirational Victor magazine issue, view of V beach, location where the Clyde landed and reconstructed trenches. From these, the passion and enthusiasm of the author for this story is further made clear. The book opens with a map of the Gallipoli Peninsula, providing the reader with an overview of the campaign right from the outset as well as maps and plans of V beach. It is great to have this kind of reference at the start of a book a opposed to being stuck in the middle, or part of an Appendix at the end as it provides the reader right away with an overview of the battle.

The Voices from the Past series has set new standards for history records. The selection of eye witness accounts has been impeccable and they have been reproduced, with sensitive editing,
into a seamless and compelling account of courage, tragedy and the tumult of war – Most Highly Recommended.

Born and raised in Norwich, where he still lives, Stephen Snelling been a writer and journalist all his adult life. Since joining Eastern Counties Newspapers straight from school, he has worked variously as a district reporter, sports journalist, sports editor, columnist and features editor. Since 2010, he has concentrated on writing books.