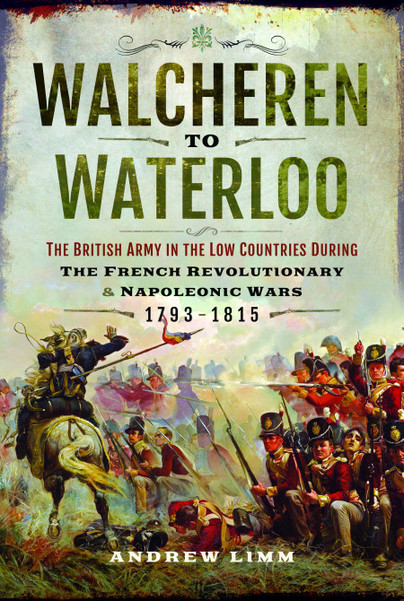 Click here for help on how to download our eBooks
Add to Basket
Add to Wishlist
You'll be £4.99 closer to your next £10.00 credit when you purchase Walcheren to Waterloo. What's this?
Need a currency converter? Check XE.com for live rates

The military success achieved by the Duke of Wellington casts a long shadow over the history of the British Army in the French Revolutionary and Napoleonic wars. The popular account of Britain's military record in the great struggle against Napoleonic France is chiefly one of glorious victories, with Britain cast as the saviour of Europe from the Corsican 'monster'. Most British historians have focused on retelling stories of British success, notably Wellington's, in Spain, Portugal and during the Hundred Days campaign and tend to pay little attention to British military defeats.

But is the focus on Wellington's career really an appropriate way to understand the performance of the British army in a conflict that lasted over twenty years? And what about the army’s poor record in the Low Countries, where it suffered defeats and sustained crippling losses during the same period? In this perceptive and highly readable study Andrew Limm answers these questions and provides a more balanced account of the British contribution to the downfall of Napoleon.

Limms does a good job of showing the problems of coalition friction and how it would undermine big advantages in their war efforts.

This is a good history of the British campaigns in the Low Country. Each one is covered in some detail, with a look at the motives for the campaign, the planning that went into each, the forces involved, and the course of the campaigns.

It is a book that I recommend to all lovers of Napoleonic wars because it examines the military performance of His Majesty's armies in some little-known or totally ignored campaigns and casts doubt on a whole series of certainties that developed at the end of those two long conflicts that were the Revolutionary Wars and the Napoleonic Wars.

I heartily recommend the book and feel is it a requirement for anyone wanting to understand the British army during the time of Napoleon.

The Napoleonic Historical Society newsletter, May 2019

It’s an interesting book, and the author has obviously done a lot of research and analysis. It’s written in a readable style and full of comparisons between the British, French and Prussian armies of the time.

I would recommend this book to anyone studying the management of military campaigns, and who is generally interested in the military history of the Napoleonic period.

This is a part of British military history that should be read by all professionals and enthusiasts and fortunately, here is a book to start with.

This is Andrew Limm’s first book having written his doctoral thesis at one of the best war studies departments in the UK. He is already an experienced historian for the period of the Coalition Wars that led on to the war against Napoleon. This work has all the trademarks of an academic thesis with notes from page 173-212 in small print - 39 pages with a bibliography of a further 19 pages. This is a work of scholarship but that does not mean it is dense and unreadable.

Given the complexity of the period Dr Limm carefully concentrates on the key issues of the time leading to a volume of manageable size that will encourage further reading around the subject. This is certainly a period of military history that needs a great deal more work and publications for the general reader. This work is not only very useful, but readable and accessible.

If you are tired of reading that Britain's contribution to the Napoleonic Wars began in the Peninsula and ended at Waterloo, and if you are bored to death by hagiographies of Wellington, read Andrew Limm's excellent book.

This book is worth reading for the conclusion alone. Not only is it an excellent condensation of the previous chapters but it is a remarkable summation of Wellington as a military leader which captures his essence in a way superior to many more wordy works.
We recommend this book without reservation.

This book offers an interesting insight into the progress of the British Army on campaign in the Low Countries during the French Revolutionary and Napoleonic Wars. It suggests that progress was inhibited by an absence of will to learn from mistakes – the complete opposite of the inquisitions and reforms initiated by the Prussians after 1806 under Scharnhorst. The book explores why the British Army was unable to grasp the essentials and it examines the collective responsibility of generals and politicians. Very well researched and presented, this is a very valuable insight into the pre-Waterloo situation and assists in understanding how success under Wellington was achieved.

Dr Andrew Limm teaches history at the King Edward VI High School for Girls, Birmingham. He holds a BA and PhD from the University of Birmingham. He has a passion for military history, in particular the history of the British army of the eighteenth and nineteenth centuries, and this study focuses on its command, leadership and operational effectiveness.