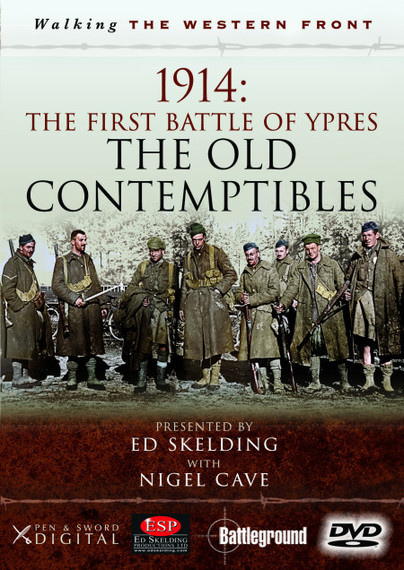 Walking the Western Front 1914: The First Battle of Ypres (DVD)

Preorder
Add to Wishlist
You'll be £13.59 closer to your next £10.00 credit when you purchase Walking the Western Front 1914: The First Battle of Ypres. What's this?
+£4.50 UK Delivery or free UK delivery if order is over £35
(click here for international delivery rates)

Continuing their exploration of what happened during the early months of the First World War, filmmaker Ed Skelding and military historian Nigel Cave now turn their attention to the first major battle for the Belgian town of Ypres – fought between 19 October and 22 November 1914. At the start of First Ypres, the war was only a few weeks old, during which time the British Expeditionary Force had fought their first battles at Mons and Le Cateau. Following those early encounters, the BEF then began the gruelling and often desperate retreat south to Paris where they joined with the French army to halt the German advance at the River Marne.

What followed became known as ‘the race to the sea’ where the opposing armies tried to outflank each other in the drive north-west towards the North Sea. For the British and the French, at the end of the ‘race’, the fighting would now concentrate on their efforts to take Ypres. It was there that the true horror of the fighting on the Western Front would be realized. Four years of bitter fighting would reduce the place to rubble. The huge number of casualties among the British troops who fought there would be the worst of the war.

Four great battles were fought at Ypres – 1914, 1915, 1917 and 1918. In this first of two volumes telling the story of the 1914 battle, the opening moves are explained and how it was that the ‘contemptibly little army’ – as described by the German Kaiser – held out against near overwhelming odds to hold their ground and keep Ypres in British hands for the rest of the war.

Ed Skelding is a film-maker with more than twenty World War One broadcast documentaries to his credit. These include the series made for ITV - Great Battles of the Great War, which resulted in the book of the same name for Pen & Sword with author Michael Stedman.