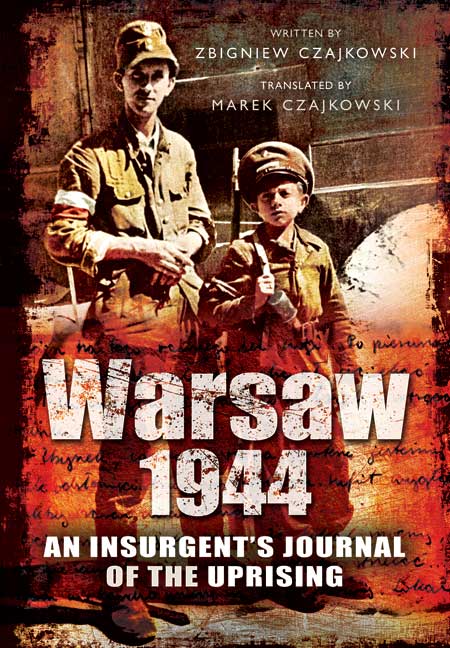 An Insurgent's Journal of the Uprising Written by Zbigniew Czajkowski

Memoirs of the gallant but doomed 1944 Warsaw Uprising against the Nazis are extremely rare as few insurgents survived and most who did were to perish later at the hands of either the Russians or Nazis. This remarkable Journal, written shortly after the event, describes not only the author's own experiences during the Uprising but the wider picture. With the Red Army's arrival apparently imminent, the Polish Underground fighters decided to wage open warfare against the Nazi occupiers. This courageous decision was taken despite the Poles' chronic shortage of arms, ammunition and medical support but in the expectation of the Russians relieving them gratefully for hastening the defeat of the Germans. However, with cruel and calculated cynicism, Stalin halted the offensive and let the uneven match be settled without their involvement. The outcome was inevitable; Warsaw was largely destroyed; the Polish men, women and children fighters crushed; and the Nazis weakened. The Red Army then moved in.

Never before published in English but acclaimed by readers and critics of the 2001 Polish edition, Warsaw 1944 - An Insurgent's Journal of the Uprising captures the atmosphere of patriotism, courage and determination to succeed against overwhelming odds. It is a tragic yet inspiring story.

This book chronicles the experiences of a Polish resistance fighter from July to October 1944, covering in vivid detail what was one of the most infamous episodes of the Second World War. Encouraged by the prospect of Soviet support, the Polish Underground began to take control of Warsaw on the 1st August 1944, only for Stalin to halt his armies on the outskirts and so, throughout the next two months, allow the Germans to systematically destroy both the resistance and the city, and with it the political and military leadership which would pose a threat to the regime which Russia planned to impose upon Poland. First hand accounts of the Uprising are rare as many of the participants were killed, and so we are most fortunate to have one passed down to us which gives a very lucid and personal day by day account of this most tragic of episodes.

Written from notes made at the time this book gives the story of a teenager caught up in the Polish Resistance movement during the German occupation. It gives an insight into the ad hoc nature of the clandestine world that the author lived in. The traumatic events include escaping a Nazi execution gang while his mother was murdered in the room next door. The journal provides no explanations of grand strategies, just a foxhole view of its authors existence as he and his comrades struggled to fend off vastly superior forces in their ‘fortress’ of Warsaw. His descriptions of the weaponry are quite enlightening, and probably provided material for the anarchist’s cookbook. The fact that he was one of the few to survive the uprising and subsequent imprisonment adds poignancy o the tale, and having settled and become a success in England, he reminisces that from his group, only two survived. A map of the city town and some interesting photos are included which complete this excellent read.

A rare account of the gallant but doomed 1944 Warsaw Uprising, written shortly after the event and never before published in English.

The subtitle of this book is 'An Insurgent's Journal of the Uprising' and this tells you that this is no dusty, learned and researched tome. This was written by someone who was there, who was an insurgent!

Memoirs of this sort, by a fighter or a participant are very rare indeed, since few insurgents from that period survived either the insurgency - the uprising - or the death camps that followed.

Following the fall of Poland in 1939 and the occupation by Nazi Germany, a resistance movement was formed, and organised by, amongst others, the Boy Scout movement, from which military battalions were formed. Many young people considered it their duty to join this resistance and as the underground was drawn from educational systems, social organisations and the aforementioned boy scouts, the movement grew.

In 1941 the German-Soviet war had begun and by 1944 the Soviet army had advanced into Eastern Poland. In Warsaw, the military command of the Home Army decided against an uprising in the city and most of their weaponry was despatched to resistance units in the surrounding countryside. However, in July 1944, with the Red Army approaching the River Vistula, the Home Army decided to liberate Warsaw themselves, and so the uprising began. It was a horrific failure, as history tells us, with entire units wiped out to a man ( or woman), and the Soviets, who being cunning and ruthless, sat on the sidelines and allowed the resistance to be eliminated and the fighting involved helped weaken the German forces.

This book details the minutae, the day to day life of the volunteers as well as telling the tragically heroic story of the insurgents and is all the more fascinating for the small details. There are some very interesting photographs, poignant and informative shots of ordinary people. No great Generals or politicians here, just ordinary but brave Poles.

This is a book that has never before been published in English, and the translation is by the son of the author.

Zbigniew Czajkowski was born in Warsaw in 1926. He became a Boy Scout and after the German invasion he became involved with the Polish Underground. In 1944 he commanded a unit within the elite 'Parasol Battalion' of the underground and was reccomended for valour.

Following the fall of Warsaw, he was transported to a POW camp in Germany where he stayed until the war ended. In 1946 he arrived in Britain, where he made a succesful life, starting his own company which designed and built Fatigue Test machines.
he died in London in 1999.

An unusual and illuminating history of the Warsaw uprising, and one that every student of history should have, if only for the rarity, but also for the amount of new information contained and the first person viewpoint.