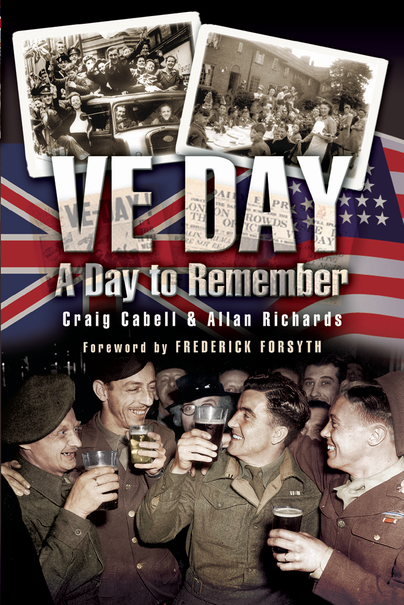 Click here for help on how to download our eBooks
Add to Basket
Add to Wishlist
You'll be £4.99 closer to your next £10.00 credit when you purchase VE Day - A Day to Remember. What's this?
Need a currency converter? Check XE.com for live rates

The authors have compiled a collection of memories and anecdotes from celebrities and members of the public covering their experiences of the Second World War and the day that Victory over the Nazis was declared. We hear from not only those in the Armed Forces but civilians. The book catches the mood of jubilation and exhilaration yet also the great sadness of the huge waste of human life and resources. Hard times still lay ahead.

'The authors have produced a book that reads smoothly and presents the many facets of VE Day. Looking back from here the difficulty is that we can see how much had not changed. Britain was still a grey place, and continued to be for another six years or so as the Atlee Government worked hard to squander the peace, maintaining rationing even as it was ending in Germany and the other ravaged countries of Europe. This is an informing and delightful book and the readable text is very effectively supported by a well-selected set of photo plates.'

Catches the mood of jubilation and exhilaration yet also the great sadness of the huge waste of human life and resources. Hard times still lay ahead.

After five years, eight months, and five days of massive devastation, the end of the European phase of World War II is celebrated on May 8, 1945. Victory in Europe was commemorated with celebrations all around the world in recognition of the unconditional surrender of all German forces signed in Reims, France, the day before. British Prime Minister Winston Churchill told war-weary Londoners, This is your victory, while U.S. President Harry Truman reminded Americans that until Japan's defeat, Victory is but half-won.