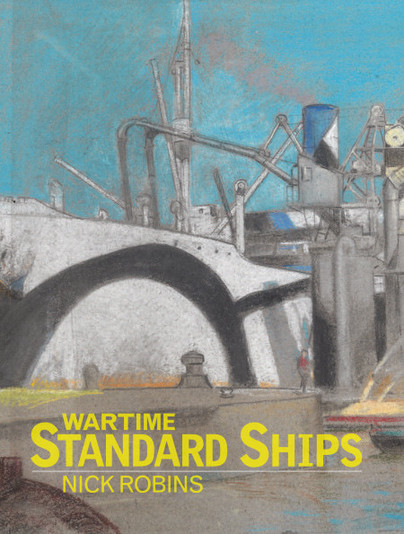 Add to Basket
Add to Wishlist
You'll be £25.00 closer to your next £10.00 credit when you purchase Wartime Standard Ships. What's this?
+£4.50 UK Delivery or free UK delivery if order is over £35
(click here for international delivery rates)

In both World Wars there arose a pressing need for merchant tonnage both to supplement existing ships but, more importantly, to replace ships that had been sunk by enemy action, and the key to the Allied strategy in both wars was a massive programme of merchant shipbuilding. This need gave rise to a series of standard designs with increasing emphasis on prefabrication and a progression towards welded hulls.

This new book tells the remarkable story of the design and construction of the many types that not only contributed to their country’s war efforts, but were also responsible for a cultural change in world shipbuilding that would lay the foundations for the post-war industry. The story begins in the First World War with the National type cargo ships which were the first examples of prefabricated construction. The best known of all types of wartime standard ships, of course, were the Liberty ships and their successor, the better equipped Victory ships, both built in the United States. Some 2,700 Liberty ships were built and this incredible achievement undoubtedly saved the Allies from losing the War. In Canada, the Ocean and Park ships made a further major contribution. Germany and Japan also introduced standard merchant shipbuilding programmes during the Second World War and these are covered in detail. The many different types and designs are all reviewed and their roles explained, while the design criteria, innovative building techniques and the human element of their successful operation is covered.

Some of the story has been told piecemeal in a range of diverse books and articles, a few with extensive fleet lists. However, the complete history of the twentieth century wartime-built standard merchant ship has not previously been written, so this new volume recording that history within its appropriate technical, political and military background will be hugely welcomed.

During the Second World War ships were built rapidly, especially in the USA. In his latest book the author tells the story of this remarkable shipbuilding achievement. This is a very well illustrated book, which is easy to read and is full of little-known facts. The book is divided into 16 chapters which cover design, construction, the post war selloff and the influence of the designs on future shipbuilding methods. Good value for money and a welcome addition to anyone’s bookshelf.

This is an interesting book that covers a great deal of material in a fairly small amount of space, providing a good overview of the massive civil shipbuilding programme that played a major part in the Allied victory in both World Wars, by producing these standard ships quicker than the Germans could sink them.

This is a book which has been produced to high standards, and it makes very good use of its many fine illustrations. It succeeds in being technically detailed whilst being highly readable, and it leaves a resoundingly clear message about the importance of shipping to national security.

I found this not just an interesting book to read but learnt a lot, including the German and Japanese standard ship programmes.

I was unaware of a standard merchant ship until this terrific book by Nick Robins landed in my lap. Essential reading for students of maritime history.

The author has a special interest in commercial ships of all types and he has put this experience to the subject of Standard Ships. There is a wealth of photographic illustration that strongly complements an able text – Most Recommended.

Although aimed primarily at those interested in wartime shipping, this book could well be of value to any merchant-shipping enthusiast. Modellers of ‘Emergency’ cargo ships could also find it of use. Finally (and despite the previously-mentioned ‘limitations’), for this reviewer it is in his (very rare), ‘Must have’ category.