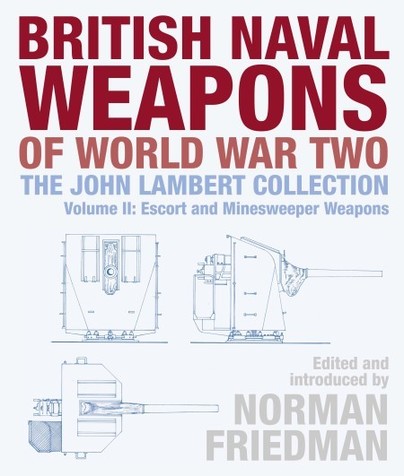 Add to Basket
Add to Wishlist
You'll be £40.00 closer to your next £10.00 credit when you purchase British Naval Weapons of World War Two. What's this?
+£4.50 UK Delivery or free UK delivery if order is over £35
(click here for international delivery rates)

John Lambert was a renowned naval draughtsman, whose plans were highly valued for their accuracy and detail by modelmakers and enthusiasts. By the time of his death in 2016 he had produced over 850 sheets of drawings, many of which have never been published. These have now been acquired by Seaforth and this is the second of a planned series of albums on selected themes, reproducing complete sheets at a large page size, with an expert commentary and captioning.

The initial volumes concentrate on British naval weaponry used in the Second World War, thus completing the project John Lambert was working on when he died. His interest was always focused on smaller warships and his weapons drawings tend to be of open mountings – the kind that present a real challenge to modelmakers – rather than enclosed turret guns, but he also produced drawings of torpedo tubes, underwater weapons, fire-control directors and even some specific armament-related deck fittings. Following the first volume on destroyer armament, this one covers all such weapons carried by the various types of British escorts and minesweepers of this era, including the ‘passive’ elements like sweeping gear, decoys and electronics.

"The book is most welcome, and again is essential for serious model makers. Strongly recommended."

This book will be of great value to anyone trying to model these ships, providing an impressive level of detail for the many weapons used during the war. I’m also finding it rather useful in my efforts to identify particular aspects of pictures of these ships.

This is one of those books where the the most effective review is “WOW!!!”. The late John Lambert was a prolific technical illustrator who was highly regarded for the quality of his work and knowledge of naval vessels and weapons. The publishers have secured his extensive library of plans, many never before published, and are now releasing a series of books based on the images. This will be warmly welcomed by warship modellers and naval historians, but should be widely read and enjoyed by everyone with any interest in warships and their weapons – Most Highly Recommended

The presentation by Seaforth is superb; my rating reflects the fact that the detail is so fine grain as to make the book a bit niche, an unavoidable result of editing down from the original much larger page sizes; but that doesn't fairly reflect the service Seaforth have done in publishing this material for future users.

This large scale book shows how technical drawings were achieved before the era of computers and computer-aided design. Packed with intricate and highly detailed technical drawings of British Naval weapons that were designed and used in WWII, this is a worthy memorial to a man whose technical abilities were at the forefront of the war at sea. A hugely impressive volume.

A truly fascinating and ground-breaking work.

Modeller or just with a fascination with Royal Navy warships and weaponry from the WW2 period, then I am confident you will enjoy adding this second volume to your own reference shelf. I am so glad that Seaforth have been able to bring these marvellous plans to a wide audience by these new publications. Excellent.

This splendid large format quality book provides a tribute to the late Hugh John Lambert and his extraordinary comprehensive range of master plans of naval ordnance; he produced over 850 sheets of drawings, many of which have never been published. Seaforth intend to put that right and this first volume focuses on British destroyer weapons of World War II. Lambert died three years ago and the book includes a full obituary. Norman Friedman, one of the foremost authorities on twentieth century naval weaponry, has written a very good fifty-three page scene setter by way of an introduction. It provides a first class overview of British destroyer development and their weapons, mostly their guns, from the period before World War I up to 1945, illustrated by over fifty photographs. This is followed by 176 pages of weapon, mostly guns but also systems plans, beginning with ten pages of basic destroyer plans (‘S’ series) of HM Ships: Whitehall (1924), Harvester (1940), Matabele (1939), Napier (1940), Quilliam (1939) and Caesar (1944). The hundred sheets of original drawings have had to be reduced significantly to fit into and across the double page presentations, which inevitably reduces their readability and the expert may require magnifying glasses for full study. Nevertheless this section is the core of this book and the drawings are very fine. They start with the ‘G’ series main armament, 4-inch to 4.7-inch, followed by secondary armament, mostly 40mm Bofors, then Fire Control ‘F’ series, completing with torpedoes (‘T’ series) and other weapons, mines and depth charges (‘M’ series).
This book is handsomely produced to Seaforth’s high standards and is naturally very well illustrated. Whilst being a rather narrow subject it is a must for serious naval model makers, naval ordnance professionals, researcher and enthusiasts. 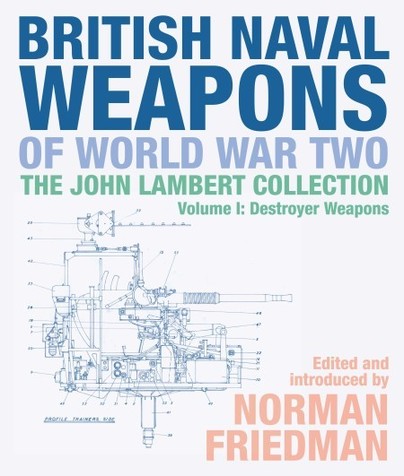 John Lambert was a renowned naval draughtsman, whose plans were highly valued for their accuracy and detail by modelmakers and enthusiasts. By the time of his death in 2016 he had produced over 850 sheets of drawings, many of which have never been published. These have now been acquired by Seaforth and this is the first of a planned series of albums on selected themes, reproducing complete sheets at a large page size, with an expert commentary and captioning. The initial volumes will concentrate on British naval weaponry used in the Second World War, thus completing the project John Lambert was…

Click here to buy both titles for £80.00
More titles by Norman Friedman