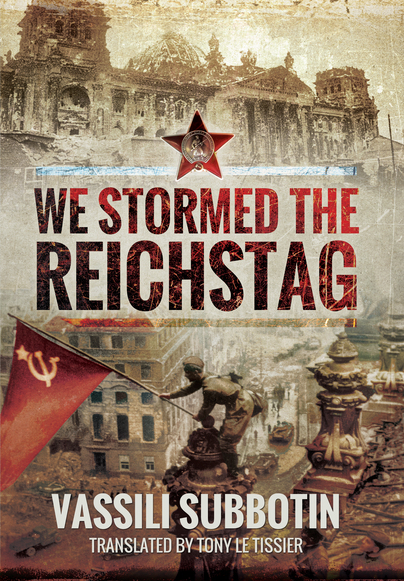 We Stormed the Reichstag (Kindle)

You'll be £4.99 closer to your next £10.00 credit when you purchase We Stormed the Reichstag. What's this?
Need a currency converter? Check XE.com for live rates

In 1941 when Germany invaded the Soviet Union Vassili Subbotin was caught up as an ordinary soldier in the Red Armys great retreat. In 1945, during the final days of the war, as a war correspondent, he went into Berlin with the troops who fought the ferocious final battles in the streets and sealed Germanys defeat. Later he recorded in vivid impressionistic detail the climax of the last act of the campaign and of the entire war in the east the storming of the Reichstag which came to symbolize of the Soviet victory over the Nazis.
His first-hand experience of that final operation and his insight into the small band of ordinary soldiers who played a part in it is graphically conveyed in this memoir. In his description of the confusion and violence of the street fighting around the Reichstag and the vicious hand-to-hand floor-by-floor struggle to capture the huge shattered building, the personalities of the soldiers are revealed, as are their fears and determination.

Vassili Subbotin served as a conscript in the Red Army during the Second World War, first as an infantryman during the Soviet retreat after the German invasion in 1941, then as a divisional war correspondent during the Red Armys long advance towards Germany. He was present throughout the final battle for Berlin and observed the capture of the Reichstag at first hand. After the war he wrote this evocative memoir recording his experiences and those of the soldiers who took part, and in later life he was reunited with those who survived the fighting.

A fascinating narrative of what Soviet troops experienced in those days.

During many years working in several senior official positions in Berlin including spells as provost marshal and British governor of Spandau prison Tony Le Tissier accumulated a vast knowledge of the Second World War on the Eastern Front. He has published a series of outstanding books on the subject including The Battle of Berlin 1945, Zhukov at the Oder, Race For the Reichstag, Berlin Battlefield Guide and The Siege of Kstrin 1945. He has also translated Prussian Apocalypse: The Fall of Danzig 1945, Soviet Conquest: Berlin 1945, With Paulus at Stalingrad, Soviet Conquest: Berlin 1945 and After Stalingrad: Seven Years as a Soviet Prisoner of War.