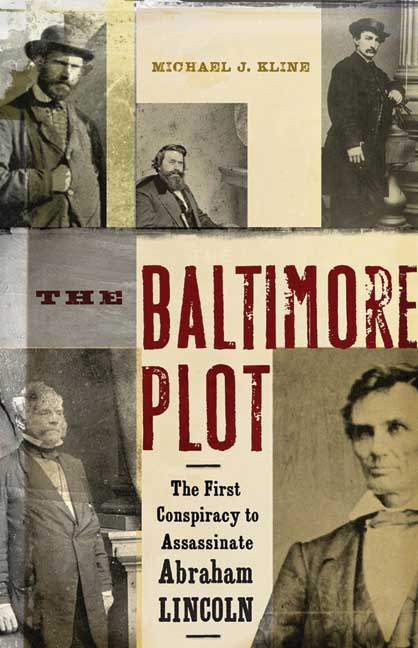 Add to Basket
Add to Wishlist
You'll be £16.99 closer to your next £10.00 credit when you purchase The Baltimore Plot. What's this?
+£4.50 UK Delivery or free UK delivery if order is over £35
(click here for international delivery rates)

“Michael J. Kline's tense telling of Lincoln's journey through the secessionist hotbed of Baltimore en route to his 1861 inauguration reads like a detective thriller. Meticulously researched and exceptionally written, Kline
offers convincing evidence from famed detective Allan Pinkerton and others that the Baltimore plotters' threat was real. A must-have for Lincoln readers.”—Kate Hannigan, author of The Flour Girls

“Kline details an alleged plot to which most Lincoln books only allude. Comparing favorably with Harold Holzer's Lincoln President-Elect, this book demonstrates the use of archival sources beyond the usual standard and is
recommended for specialists and general readers.”—Library Journal

“Gathering information, arguing its value, and re-creating the tension of the secession crisis, Kline's narrative absorbs readers....He does not hide behind generalizations or best guesses.”—Civil War Librarian On February 11, 1861, Abraham Lincoln's private train began its journey from Springfield, Illinois, to the City of Washington, carrying the president-elect to his first inauguration. As Lincoln made his way east, private detective Allan Pinkerton and a separate sting operation by New York City detectives uncovered evidence of a conspiracy to assassinate Lincoln during his stop in Baltimore. The largest city of a border state with secessionist sympathies, Baltimore had been infiltrated by paramilitary groups bent on killing Lincoln, the “Black Republican.” In The Baltimore Plot: The First Conspiracy to Assassinate Abraham Lincoln, Michael J. Kline turns his legal expertise to evaluating primary sources in order to discover the extent of the conspiracy and culpability of the many suspects surrounding the case. Full of memorable characters, including Kate Warne, the first female undercover agent, and intriguing plot twists, the story is written as an unfolding criminal proceeding in which the author allows the reader to determine whether
there was a true conspiracy to kill Lincoln in 1861.

MICHAEL J. KLINE is partner at Woodcock Washburn LLP in Atlanta, Georgia. He is the former editor of the Journal of Law and Commerce.

"On this day in 1864, Northern voters overwhelmingly endorse the leadership and policies of President Abraham Lincoln when they elect him to a second term. With his re-election, any hope for a negotiated settlement with the Confederacy vanished. In 1864, Lincoln faced many challenges to his presidency. The war was now in its fourth year, and many were questioning if the South could ever be fully conquered militarily. Union General Ulysses S. Grant mounted a massive campaign in the spring of that year to finally defeat the Confederate army of General Robert E. Lee, but after sustaining significant losses at the Wilderness, Spotsylvania, and Cold Harbor, the Yankees bogged down around Petersburg, Virginia. As the fall approached, Grant seemed no closer to defeating Lee than his predecessors. Additionally, Union General William T. Sherman was planted outside of Atlanta, but he could not take that city. Some of the Radical Republicans were unhappy with Lincoln’s conciliatory plan for reconstruction of the South. And many Northerners had never been happy with Lincoln’s 1862 Emancipation Proclamation, which converted the war from one of reunion to a crusade to destroy slavery. Weariness with the war fuelled calls for a compromise with the seceded states." - HISTORY

View all events View all anniversaries
Other titles in Westholme...