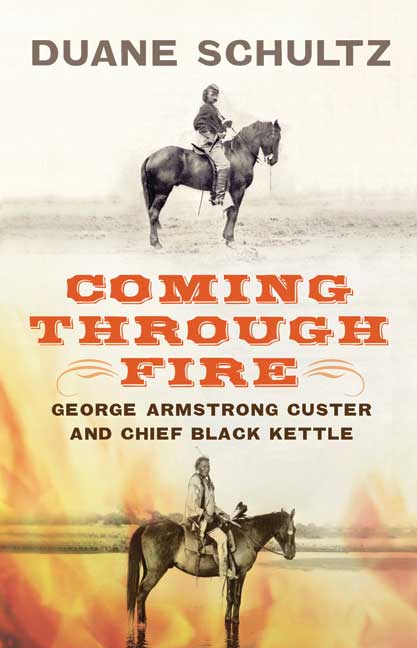 Add to Basket
Add to Wishlist
You'll be £25.00 closer to your next £10.00 credit when you purchase Coming Through Fire. What's this?
+£4.50 UK Delivery or free UK delivery if order is over £35
(click here for international delivery rates)

The cold dawn of November 27, 1868, was the moment George Armstrong Custer had longed for ever since the Civil War ended three years before. It was also the moment Black Kettle of the Cheyenne nation had feared ever since he had survived the deadly attack on his people at Sand Creek, Colorado Territory. Custer, who gloried in battle, was no longer the national hero, the celebrity he had been in wartime. He was a forgotten man who had failed in his first Indian campaign the year before. He needed a resounding victory to resurrect the attention he craved, and the sleepy Cheyenne village along the banks of the Washita River—ironically near present-day Cheyenne, Oklahoma—proved irresistible. Custer led his 7th U.S. Cavalry in an early morning charge that wiped out the encampment, killing those who resisted and some of those who fled. Black Kettle’s Cheyenne had signed documents of peace with the US Government as they had done before Sand Creek, but once again that did not protect them. Custer ordered his troops to capture women and children and traveled with these prisoners as a way to protect his column from a retaliatory strike on their way back to their post. Called both a massacre and a battle, the action at the Washita River returned Custer to national prominence as the “greatest Indian fighter of all.”

Coming Through Fire: George Armstrong Custer and Chief Black Kettle tells the converging stories of a Civil War hero and a native warrior who met along the Washita River. Black Kettle had given up fighting—he had “come through the fire”— and made his mark on treaty after treaty to try to save the Cheyenne and their way of life from the encroachments of the US government and white settlers. He watched the government breach the terms of each treaty, yet he continued to work for a compromise, knowing that negotiations were the only way his people could survive. But the flood of wagon trains and settlements, the killing of the great buffalo herds, the new diseases and broken promises, political ambition, naked greed, and continuing restrictions on land, food, and shelter persisted. As the US Army, including Custer, continued to attack and forceably move Indians to reservations despite treaties indicating otherwise, Black Kettle’s dreams of peace were shattered. He ended his life face down in the freezing waters of the Washita River, shot by one of Custer’s troopers. The “greatest Indian fighter,” too, would not survive the Indian Wars, being cut down near the Little Big Horn River, in part for his actions against Black Kettle and the
Cheyenne.