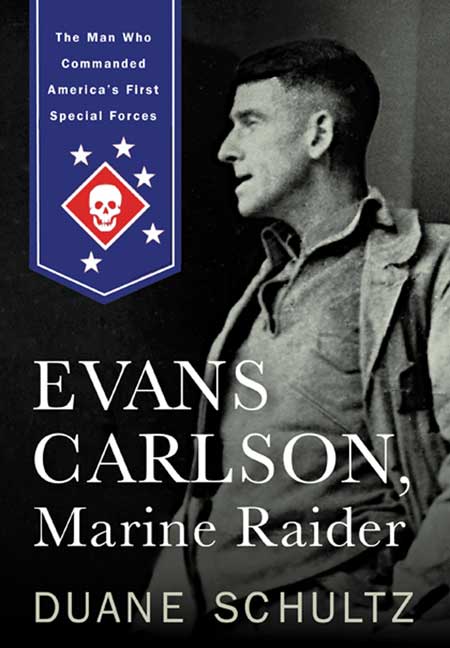 Add to Basket
Add to Wishlist
You'll be £19.99 closer to your next £10.00 credit when you purchase Evans Carlson, Marine Raider. What's this?
+£4.50 UK Delivery or free UK delivery if order is over £35
(click here for international delivery rates)

On August 17, 1942, ten days after American marines had stormed Guadalcanal in the Solomon Islands, two U.S. submarines secretly delivered a small force from the newly formed 2nd Marine Raider Battalion to Japanese-occupied Makin Island one thousand miles to the north. The raid was intended to gather intelligence and divert attention from the main American attack to the south. News of the success of this special operation took hold of the American imagination and provided a much needed boost to morale. The battalion's leader was Evans Carlson, a forty-six-year-old career marine office who had most recently served in China as a military observer. Carlson was also a friend of President Franklin D. Roosevelt and he had proposed the creation of a small elite raider force similar to the British Commandos. Having accompanied Chinese guerrillas in their war against Japan, Carlson incorporated
some of their tactics into his raider training, including a method of esprit de corps called “gung ho,” a word still used today for loyal enthusiasm. Carlson's raiders went on to conduct a lengthy operation behind enemy lines in Guadalcanal, contributing to the American victory. After months of exertion, Carlson fell ill and returned stateside. Despite his notoriety and willingness to return to the front, this decorated officer would never command again.

In Evans Carlson, Marine Raider: The Man Who Commanded America's First Special Forces, psychologist and acclaimed history writer Duane Schultz presents a fascinating and absorbing portrait of this complex officer. Son of a Congregational preacher, Carlson left home at an early age, and when he was just seventeen, the tall, lanky underage teenager bluffed his way into the army. He began his eventful military career against Pancho Villa, and continued through World War I and the
unrest in Central America and in China. Despite Carlson's personal bravery,
loyalty, and long service, Schultz reveals that his active career was cut short by the Marine command who were envious of the attention he and his men received from the press and public; foreshadowing the paranoia of the McCarthy era, he was also rumored to be a communist. His raiders remained staunchly loyal to their former commander, and when he died in 1947, they ensured he would be buried in Arlington
National Cemetery. Famed army and political cartoonist Bill Mauldin said, “There were only two brass hats whom ordinary GIs respected: Dwight Eisenhower and Evans Carlson.” This is Carlson's story.