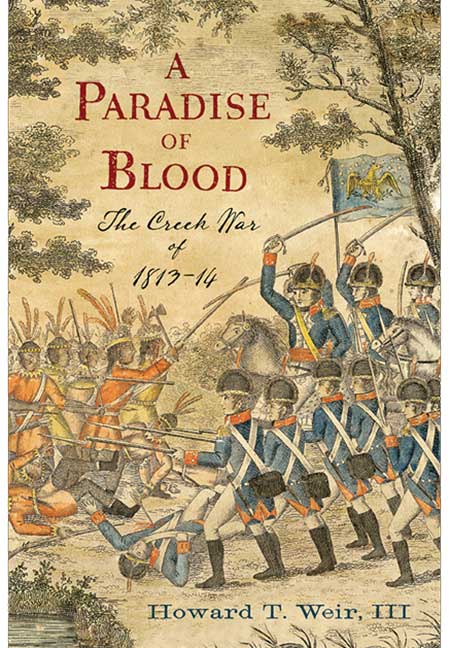 A Paradise of Blood (Hardback)

Add to Basket
Add to Wishlist
You'll be £25.00 closer to your next £10.00 credit when you purchase A Paradise of Blood. What's this?
+£4.50 UK Delivery or free UK delivery if order is over £35
(click here for international delivery rates)

In 1811, a portion of the Creek Indians who inhabited a vast area across Georgia, Alabama, and parts of Florida and Mississippi, interpreted an earth tremor as a sign that they had to return to their traditional way of life. What was an internal Indian dispute soon became engulfed in the greater War of 1812 to become perhaps the most consequential campaign of that conflict. At immediate stake in what became known as the Creek War of 1813–14 was whether the Creeks and their inconstant
British and Spanish allies or the young United States would control millions of acres of highly fertile Native American land. The conflict's larger issue was whether the Indian nations of the lower American South—the Creek, Cherokee, Choctaw, and Chickasaw—would be able to remain in their ancestral homes.

Beginning with conquistador Ferdinand DeSoto's fateful encounter with Indians of the southeast in the 1500s, A Paradise of Blood: The Creek War of 1813–14 by Howard T. Weir, III, narrates the complete story of the cultural clash and centuries-long struggle for this landscape of stunning beauty. Using contemporary letters, military reports, and other primary sources, the author places the Creek War in the context of Tecumseh's fight for Native American independence and the ongoing war between the United States and European powers for control of North America. The Creek War was savage, with atrocities such as the murder of hundreds of settlers at Fort Mims, Alabama, the greatest massacre of its kind in United States history, as well as fierce battles, including Horseshoe Bend, where more Indian warriors were confirmed
killed than in any other single engagement in Indian War history. Many notable personalities fought during the war, including Andrew Jackson Chief William Weatherford, and Davy Crockett. When the war was over, more than twenty million acres had been added to the United States, thousands of Indians were dead or homeless, and Jackson was on his American History way to the presidency. The war also eliminated the last effective Native American resistance to westward expansion east of the Mississippi, and by giving the United States land that was ideal for large-scale cotton planting, it laid the foundation for the Civil War a generation later. A Paradise of Blood is a comprehensive and masterful history of one of America's most important and influential Indian Wars.

We believe Weir has written the definitive account of the conflict and become the true expert in the field.
We have not read a more gripping account of this defining event in American history. Weir’s study is among the few full length studies of this war that have done justice to this most deserving subject. It would be impossible for readers not to feel that the events described are of an epic nature seemingly straight out of a Hollywood movie, at times even stretching the bounds of believability, and yet they actually occurred. We express our kudos to Weir for bringing these events to life as never before.

Attorney Weir digs into the little-discussed conflict that solidified Andrew Jackson's place in the national spotlight.
Weir presents Jackson as decisive and aggressive but more of a "brawler than a leader of men," and one who possessed "only the loyalty of his friends." Presenting a string of American victories in a model operational analysis of irregular warfare, Weir describes competent subordinates and volunteer fighting men as well as Native American allies, including many Creeks. Weir confidently shows that Creek capitulation ended effective Native American resistance east of the Mississippi, and their surrender of 21 million acres of land opened the region to cotton and slavery—thus "a new, peculiarly American, hell was born."

In 1812, some of the Creek Indians who inhabited large areas across present day Georgia, Alabama and parts of Florida and Mississippi decided to return to their traditional way of life. This decision soon caused the Creeks to become engulfed in the War of 1812 in what was destined to become an important campaign within that larger conflict. The immediate stake in what was to known as the Creek War was whether the Creeks and their somewhat inconsistent British and Spanish allies or the Americans could control millions of acres of fertile Native American land. The larger issue was whether nations of the American south – Creek, Cherokee, Choctaw and Chickasaw – would be able to remain in their ancestral homes.

Using contemporary sources, the author of this somewhat scholarly work places the savage and fiercely fought Creek War in the context of Techumseh’s fight for Native American independence and the ongoing war between the United States and European powers for control of North America. The book’s 500 plus pages include six maps, a few monochrome illustrations, notes, a bibliography, acknowledgements and an index.