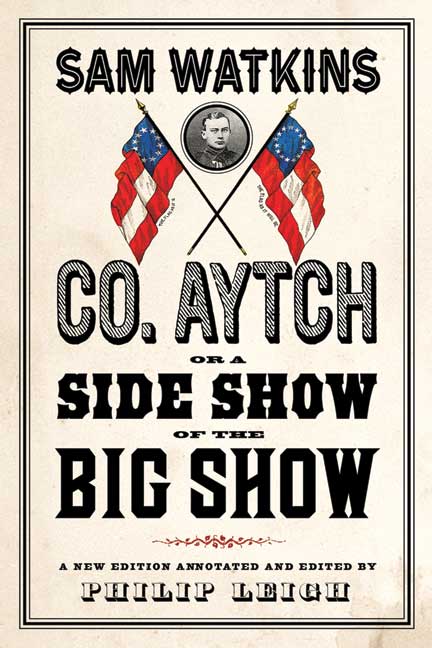 Co. Aytch, or a Side Show of the Big Show (Paperback)

A New Edition Annotated and Edited by Phillip Leigh

Add to Basket
Add to Wishlist
You'll be £12.99 closer to your next £10.00 credit when you purchase Co. Aytch, or a Side Show of the Big Show. What's this?
+£4.50 UK Delivery or free UK delivery if order is over £35
(click here for international delivery rates)

Co. Aytch, or a Side Show of the Big Show is perhaps the finest memoir of an ordinary Confederate soldier. According to Margaret Mitchell, “a better book there never was.” Sam Watkins served in Company H of the First
Tennessee Infantry for the duration of the Civil War. Remarkably, he survived some of the most intense battles of the war, including Shiloh, Chickamauga, Kennesaw Mountain, Atlanta, and Franklin. He was one of only seven of the original members of Company H when it surrendered in April 1865. Watkins’s memoir was written in the winter of 1882–83. The humor and depth of writing at times rises to a level resembling Mark Twain; thus, twenty-first century readers can still discover the everlasting treasures of Private Sam Watkins’s story just as it was. It is this reason that excerpts were featured frequently in Ken Burns’s documentary on the Civil War. However, since most of Sam’s original readers—or some of their family members—actually lived through the Civil War, much of the context for the narrative was common knowledge. But what was once received history has gradually disappeared, and presently only specialists can fully understand and appreciate Sam’s tale.

The chief aim for this new annotated edition of Co. Aytch—the first of its kind—is to amplify the experience for today’s readers by providing the missing context. Over 240 annotations clarify the situational backgrounds, personalities, and terminology that might not be familiar to most readers. The annotations also identify and explain errors mostly resulting from Sam’s occasionally faulty memory or limited perspective. Similarly, twenty-four battlefield and war theater maps enable readers to track Sam’s combat participation as well as his journeys while marching with the army. Finally fifteen photographs and prints illustrate some of the battles, people, towns, buildings, tools-of-war, and ruins that Sam witnessed. As someone once cleverly observed, “It’s not an adventure until something goes Military History wrong.” If nothing else, Sam’s memoir is a foot soldier’s view of the resulting horrors, heroics, and healing humor when war planning routinely goes awry.

SAM WATKINS (1839–1901) fought in Company H, First Tennesee Infantry for the entire duration of the Civil War before returning to his home near Mt. Pleasant, Tennessee, where he penned his memoir.